How did we diagnose the baby's allergy? part. 2 from 3 - our history of fighting allergies for the first time 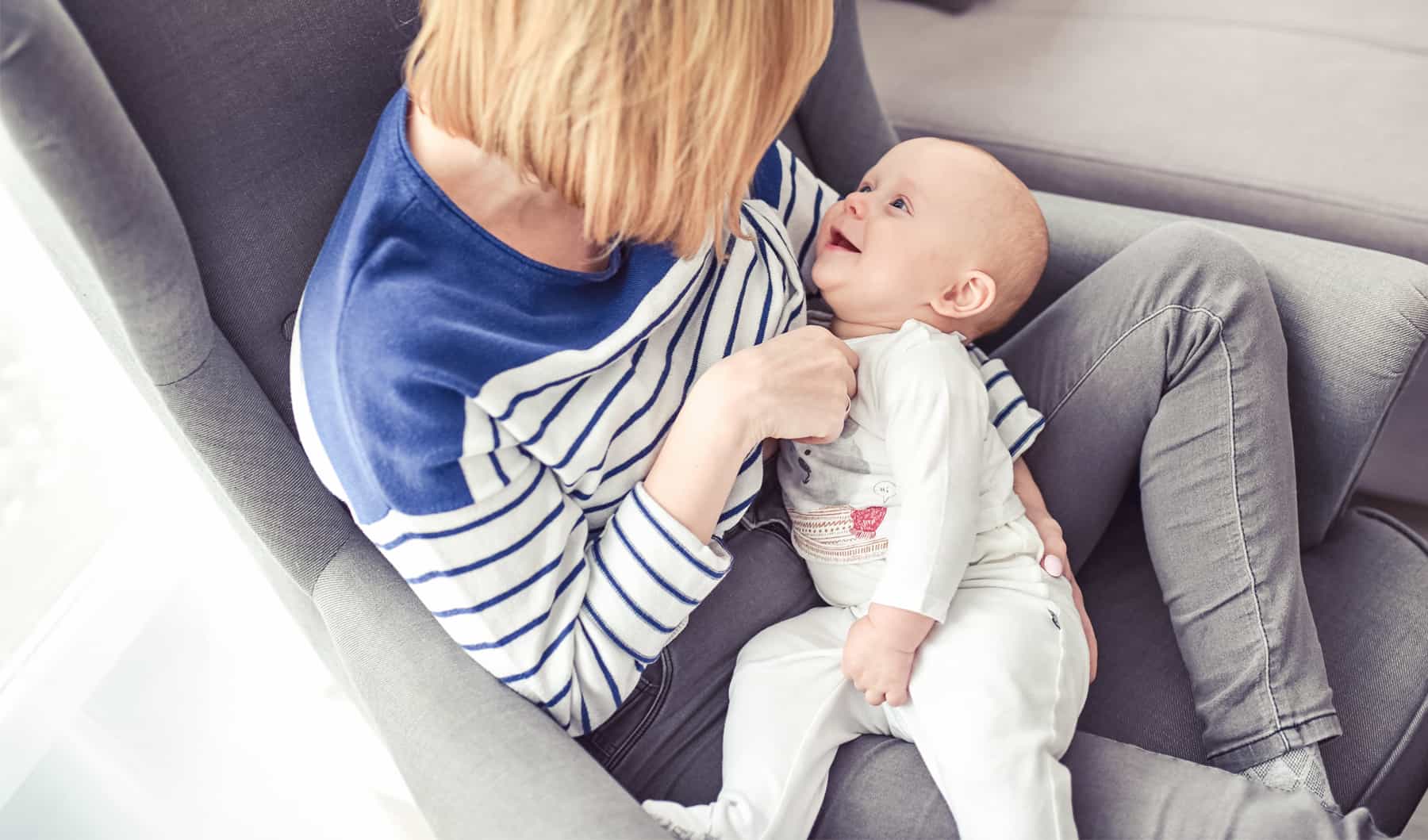 Today I have for you one of the most difficult stories of my life. A story that didn't have to end this way. A story full of mistakes, bad advisers, a sea of ​​shed tears and remorse.

This is the second post in the series "How did we diagnose an infant's allergy?" - if you haven't read - be sure to start reading from the first part.

The crying of a child, loose poop, splashing downpours, sap, dry skin, inflammation of the skin behind the ears and above the eyebrows, finally atopic dermatitis, loose, numerous, mucous poops, diaper rash area - these are symptoms that were experienced in We saw the pediatrician regularly during the weeks of a baby's life, all while breastfeeding the baby.

The pediatrician immediately recommended us an elimination diet, consisting in the complete elimination of cow's milk protein from my diet.

It is very important to know that cow's milk protein is found in milk and all derivative products, i.e. in cheese, cottage cheese, butter, cream, yogurt, buttermilk, but also in such less obvious products as bread, rusks, sausages, sausages - At first I had the impression that milk is just everywhere.

We need to know that lactose is not protein, but sugar - so it is not an allergen and we cannot be allergic to it - but we may have problems with its tolerance, but this is a topic for a separate post. Therefore, lactose-free products are absolutely not what we are looking for.

So to carry out the elimination phase correctly, first of all we read the labels of everythingwhat are we going to eat. In addition to milk, we are looking for ingredients such as yogurt, buttermilk, cottage cheese, cream, cream, milk whey, casein or milk powder. We also look for these ingredients in such seemingly vegetable products as margarine - and here the addition of butter happens - or in drugs, for example, some baby probiotics also contain cow's milk proteins.

When eating in restaurants or buying semi-finished products, we also always ask about the ingredients. There are restaurants that even add milk to pizza dough or to their own baking, and are not able to offer us a single dish.

It is very important to go through the elimination phase very precisely, don't miss anything. I myself fell into the trap of this test - by breastfeeding on an elimination diet during diagnostics, I ate biscuits - which I am saying, I even had them placed next to the bed so as not to start the day hungry. Despite the elimination of the allergen, Mikołaj still had strong allergy symptoms, because the elimination of the allergen was only apparent - as it turned out after two weeks, while eating biscuits, I provided myself and my baby with milk every day! Before that, I had lost several precious days.

In our case, the allergy to cow's milk protein was not the only one. The complete elimination of this allergen improved Santa's condition, but not much. For the doctor there was one conclusion - I cannot breastfeed and for the sake of the baby I should wean him.

Based on my own observations, I undertook the elimination of subsequent groups of allergens - I wanted to eliminate the suspicious ingredient from my diet as soon as possible, and thus the allergen in the Child.

During this process I received from everywhere very difficult advice for me to wean the baby and give anti-allergic substitute milk, and not a good word. Unfortunately, my pediatrician, whom I trusted very much at the time, urged me to do so.

I still remember ours the pediatrician at each visit asked me to wean the baby from the breast for a week and let him "rest". On the other hand, he attacked me with the argument that such a dairy-free diet is harmful to me, and after pregnancy I should eat a lot of dairy products.

In the end I buckled and when Santa had finished 2 months I decided on a 7-day administration of modified milk based on casein hydrolyzate (made of cow's milk, of course, but protein in this form is less likely to cause an allergic reaction). When planning to return to breastfeeding, I tried to give the baby a formula each time, express the milk so as not to disturb the lactation, and throw it out as prescribed by the doctor, as it probably still contained allergens and "harmed" the baby.

After a week, the toddler's skin actually improved, so the pediatrician started asking me to for the good of the child, she extended the delivery of artificial milk up to two weeks.

After two weeks, the baby's skin was in a much better condition, so the doctor urged me not to go back to breastfeeding. I was desperate and we agreed on another "attempt" of natural feeding.

Thanks to the regular pumping of milk during artificial feeding, I was able to slowly return to natural feeding, slowly replacing portions of artificial milk with my milk. Unfortunately, my lactation was no longer effective at 100% and even if I wanted to go back to breastfeeding at 100% right away, I didn't have that option yet. What is certain is that each natural feeding brought us closer to success.

While returning to breastfeeding, we went to my birthday, where I ate a soup to which, as it turned out later, was added ground almond flakes - a very strong allergen. Hours later, Santa's allergy symptoms returned, leaving him with a strong, itchy rash above his eyebrows. I went with Mikuś for another consultation and then ours the pediatrician recommended that the child be weaned againSince he is such a strong allergy, he persuaded me that this was the only sensible and healthy solution - at least for a week, until the allergens were washed out.

I remember at the end of the visit the pediatrician said: "You are breastfeeding because you care about your baby being healthy and already sick".

These words were in my head all the time. I never gave my child my milk again. I believed that my milk is harmful to the Toddler. The pain remained in me and continues to this day. As I write this, the memories of those emotions are still alive, even though it's been over 3 years, and I have tears in my eyes. I fought for every drop of this food, I gave my best to hear that I was harming my child.

Today I know that both the World Health Organization and other organizations that deal with children's health, they absolutely recommend continuing breastfeeding of children with allergies and atopy as the best form of nutrition and protection against the development of more serious forms of allergies and atopy.

Today I know that under the care of a good specialist, you can feed any form of food allergy. However, it took me two years to get this knowledge.

What's more, despite the return to modified milk, the symptoms of allergies did not subside, they were only lighter, and our allergy turned into an allergic march and bronchitis, which ended with a two-week stay in the hospital. Therefore, after another two months, the gastroenterologist changed our milk from the casein-based milk to the amino acid-based cow's milk and it stopped giving allergy symptoms.

Today, I believe that the pediatrician made the mistake of persuading me to replace 100% with natural feeding by artificial feeding.

If your pediatrician advises you similarly, I have only one piece of advice for you: look for another one as soon as possible. You can also immediately consult a proven allergist or gastroenterologist.

I will add that most of the products with which we expanded our diet after the end of the month 6, gave an immediate allergic reaction (pumpkin, apple, banana), and I was depressed. We finally managed to find a doctor by calling and finally created a diet for our son based only on healthy, unprocessed products that we prepared for him. A doctor who confirmed that weaning a child with such a strong allergy is depriving him of additional support to fight the allergy, which only gives mother's milk.

For the first 3 years of life, Santa's diet was completely free of processed products and food chemistry (preservatives, flavor enhancers, salt, sugar, etc.). It was through healthy food and through the intestines that we strengthened his immunity and won the fight against 2 allergy years later. Today, Santa has almost completely grown out of allergies, he can eat even such allergenic products as nuts or almonds (after all, we dared to try), and is slowly ceasing to respond to an allergy to cow's milk protein. Even an unusual cross-allergy to apple and birch did not appear in this year!

Here a much more beautiful story with a happy end awaits you on the blog - the story of our fight against allergy for the second time.