About me Cooperation Contact Shop
Mix
by Agnieszka Kudela
0 Komentarze 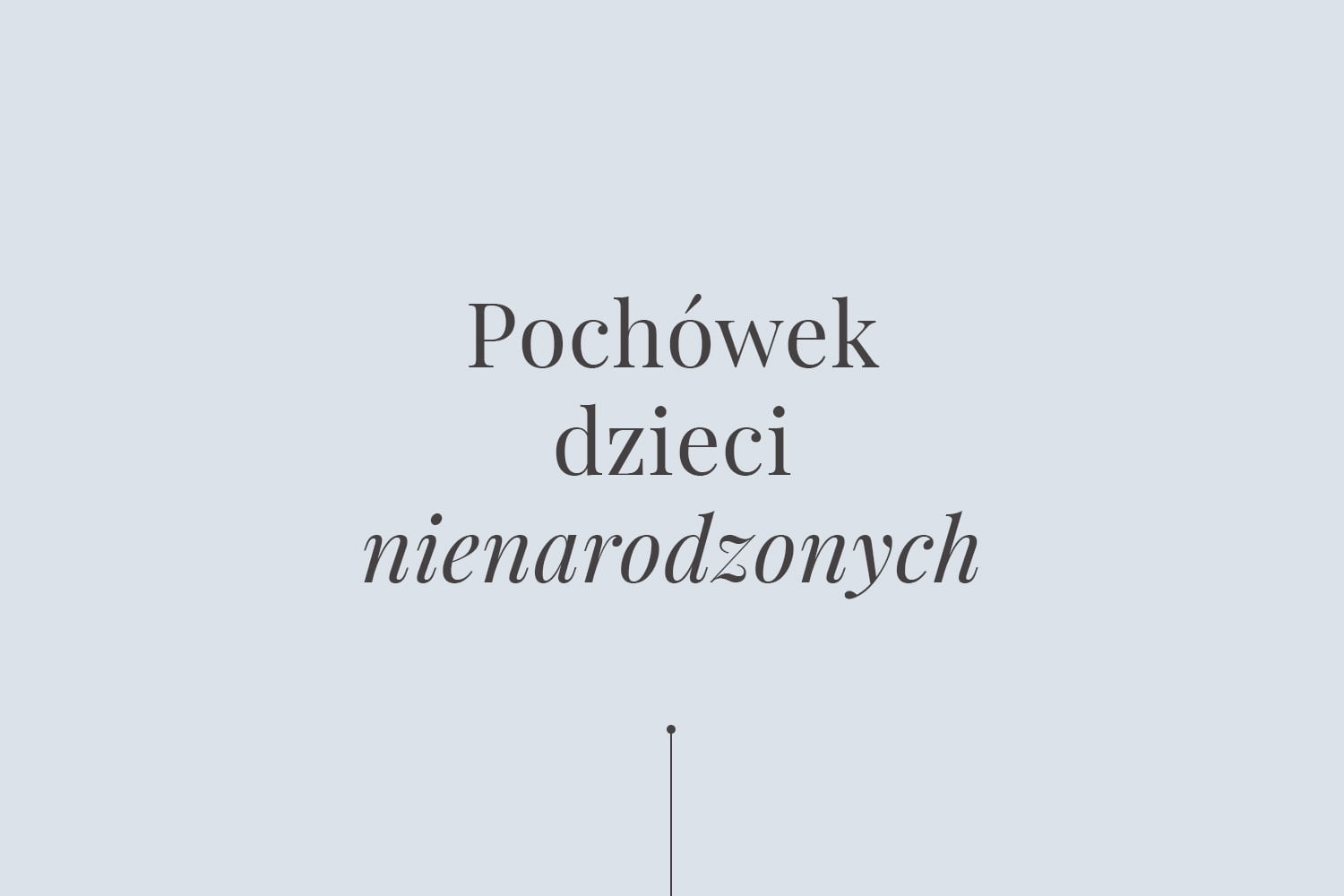 They left too early, i.e. the burial of unborn children

The family is the smallest of the social groups - called to flourish and bear fruit. It is most visible when children are born. The moment they appear is an individual and delicate matter. All the more, all decisions in this regard should belong to the most interested people, i.e. to future parents.

Sometimes, however, the waiting for a child, despite all efforts to have it, seems to last forever. Statistics show that the problem with fertility already affects approx. 1,5 million couples in Poland. It also happens, not infrequently, that the desired child appears, admittedly, but for a short time - and leaves before the parents are able to be pleased with his arrival. Miscarriages or very premature births have been and will remain real tragedies for people who are waiting for their babies. Most couples do not even want to think that this pain could become theirs. However, when faced with this tragedy, many questions and dilemmas arise in hearts and minds. Among them is usually the one concerning the organization of the funeral of an unborn child.

Legal regulations, which were also subject to various amendments during the last two decades - on May 26, 2011, they adopted the wording of the Sejm act, in force from October 14, 2011. According to it, parents are entitled to bury a child who is stillborn - regardless of how long the pregnancy was. In order for such a burial to take place, the parents have the right to apply for the body of their deceased before the birth of their child and to receive their death certificate. This is how the procedure for organizing the burial begins.

However, it is worth remembering that such a situation may arise when the cost of the funeral of an unborn child - pursuant to Art. 11 sec. 5a of the Act on Cemeteries and Burying the Dead - that is, when the doctor does not issue a written notification of the child's birth, but only issues a death certificate for burial purposes, the parents must cover their own.

When is this happening? Especially when it is difficult or impossible to determine the sex of the child. Most often, this problem occurs when the miscarriage occurs very early in pregnancy and the parents decide not to undergo genetic testing to find out which gender. Failure to conduct such an examination is related not only to the inability to establish many formal issues, but also to the parents' lack of entitlement to receive social assistance - such as maternity allowance, maternity leave and funeral grant.

Genetic tests are associated with considerable costs, at least for some parents, because their price is about PLN 400-500. Even until recently, on the death certificate of a child - especially those who died in the first weeks of pregnancy - doctors entered the probable gender based on the "gut feeling of the parents". However, they have now abandoned this practice, arguing such a decision with the reluctance to officially certify a fact that is difficult to confirm in a formal manner. In such a situation, despite the vision of incurring costs, it seems to be a better solution to conducting genetic tests. There are two arguments for this. The first one is related to the possibility of receiving social benefits, which for many people are of great help in these difficult times. The second argument is related to psychology. When the parents, after carrying out genetic tests, they already know if their dead the child was a boy or a girl - they can also give him a name, which is very helpful in the overall mourning process.

If the sex of the child is known - parents who want to bury their unborn child - after obtaining a stillbirth card from the hospital must deliver it to the Registry Office within one day. Over there, at the Registry Office, a written report of the child's birth is made and the child's birth certificate is prepared on the basis of the above documents with the annotation "stillborn child". Only on the basis of such documents, submitted to the Social Insurance Institution, parents can receive a maternity allowance and a funeral allowance in the amount of PLN 4000 to cover funeral costs.

Regardless of whether the child's gender is known or not - family or a person who will commit to it - includingand the right to organize an individual burial of an unborn child. After presenting the death certificate (if the sex is unknown - this card is issued for burial purposes), the body of the baby is collected by the funeral director and prepared for the funeral. As in the case of other burials, the date and exact place of the funeral are established in the administration of the cemetery.

Many parents wish that the funeral of their unborn child should be religious. It is enough to report it to the parish office - regardless of whether the child has been baptized or not. The Catholic Church - in accordance with the regulations in force - treats the parents' request for religious burial as a desire for baptism for their child. Therefore, the funeral liturgy of an unborn child is the ordinary funeral liturgy. It is worth emphasizing that this is not a "sprinkle" rite, but a normal funeral, during which liturgical texts are used, intended for the funeral of unbaptized children. Among the mourning ceremonies there may also be a Holy Mass. However, it is celebrated not in purple robes (which is the usual color used in the funeral liturgy), but in white liturgical vestments. It is not a mass for the child, but for the parents - therefore it does not have to be celebrated on the day of the funeral, but it can be held at any other time.

However, not all parents decide to organize the funeral of their unborn child on their owna. Usually in such cases his body goes to the hospital mortuary - for several weeks or months. This is the time when the family still has a chance to make such a decision about the funeral. However, if, after this time, it does not decide to do so, it is likely that the child will be buried in a special mass grave during a collective funeral, which is organized in many Polish cities.

Such burial of unborn children takes place once or several times a year - on October 15, among others. Then it is celebrated Lost Children's Day. The date chosen for this memory and reflection is not accidental - it marks the contractual end of pregnancy, which began around January 1.

The premature death of a child is always a very difficult experience for parents - all the more difficult as, in addition to the internal drama, they are often forced to face a lack of empathy, misunderstanding or painful remarks from people often close to them. It is worth remembering, however, that experiencing mourning - especially related to a lost child - is a very delicate and individual matter, which cannot be subject to external evaluation, let alone criticism. And the love that was brought by the unborn baby - by the very fact of its existence - has the power, with time, to heal wounds, alleviate pain and radiate hope ...

This text was prepared for us by my friend Agnieszka Skowrońska - I thank her with all my heart.

Check out the category "miscarriage”And read my other texts and watch videos related to this difficult topic of losing a child.

There are no comments

Wedding Planner
i instructor
Mom of Three: 8-year-old Mikołaj,
5-year-old Maks and newborn Flo.
In love with life and her husband. A practicing gratitude author

How glad I am that in our previous apart

A romantic weekend for two, it's time for three to start

And we still don't see Christmas. On the sconce with