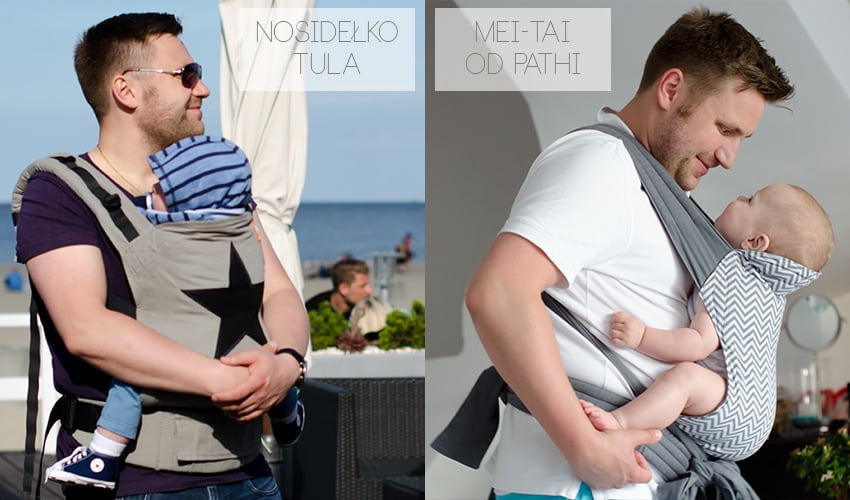 I recently told you our history of shaping, wearing and tying. I got a lot of messages from you that it's nice that at last something other than the ubiquitous Tula appeared on blogs and Instagram and questions about how our mei-tai compares to Tula, which appeared in our last photos. Here is our review and comparison of both products.

Both slings are intended for children who are already sitting on their own (previously, with a hand on their heart, I can only recommend a scarf - woven or elastic, which is easier to use at the beginning) and:

So what are the differences?

Binding closing which is the most important difference

Price - unfortunately it is also important

If I had to choose only one carrier and only for myself, I would have a difficult choice.

Tula beautiful and fashionable, with buckles perfectly matched to me, probably a bit faster to put on, and I love all the improvements, but with us, however, we wear both Santa Claus, and each time adjusting the length of the straps and pulling the buckles according to the wearer turned out to be quite time-consuming and usually required a few tweaks while wearing it. In this way, after returning the borrowed Tula, we stayed with our equally nice mei-tai, which we sewed in the theme of Santa's room. But if I had to order mei-tai again, I would consider ordering it with a more massive waist belt.

Pathi also sews soft ergonomic slings with buckles for the price from 250 PLN, but unfortunately I haven't had the opportunity to try them yet, so I can't recommend it, but I think it's worth considering this option.

And what are your experiences and thoughts regarding the slings?