About me Cooperation ContactShop
The office, DIY, Interiors
6 comments 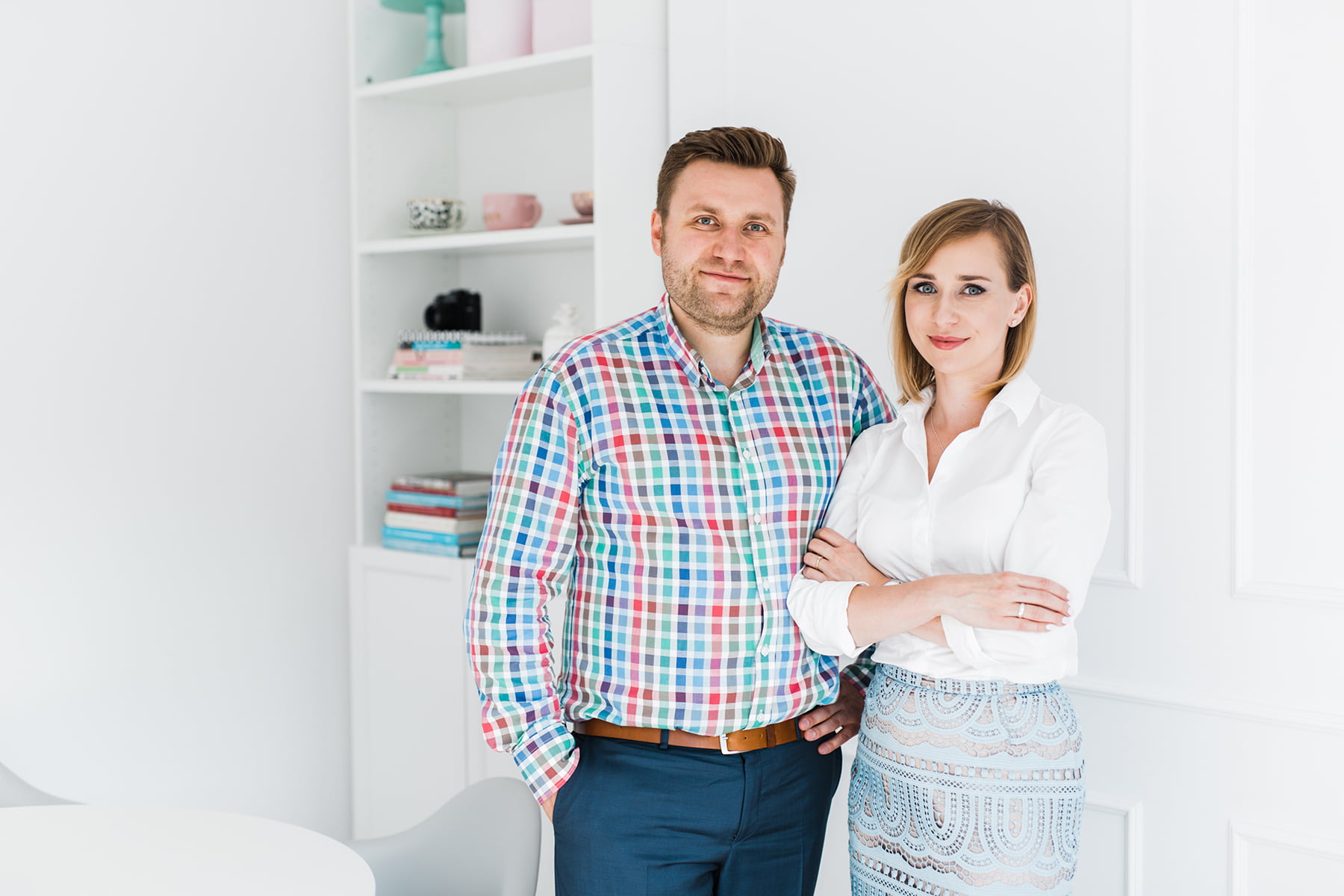 I have always liked stucco. When I was arranging my last Office of the Wedding Consultant, I decided to add elegance to this interior and use simple tools, with Wojtek's help, to make stucco on the wall.

While preparing to write this post, I saw that… I didn't even show you my previous office on the blog. But you could have peeked at them in other photos and on my Instagram, which if you like interior atmosphere, be sure to like it.

List of things you need to do stucco on the wall yourself:

The first thing I did was choose molding molding on the wall. The choice fell on 25 mm wide slats - I decided that they would all be of the same width. I saw various strips in several supermarkets, at a good price, but they felt polystyrene to the touch, so I was not enchanted. Fortunately my friend Kasia is an architect and always helps me in choosing good finishing materials - You too can take advantage of her advice, which she shares her own Mo Home blog.

Kasia once recommended a Orac Dekor company to my home and office. The difference between the strips from the market and those was so visible that the slightly higher price did not matter. 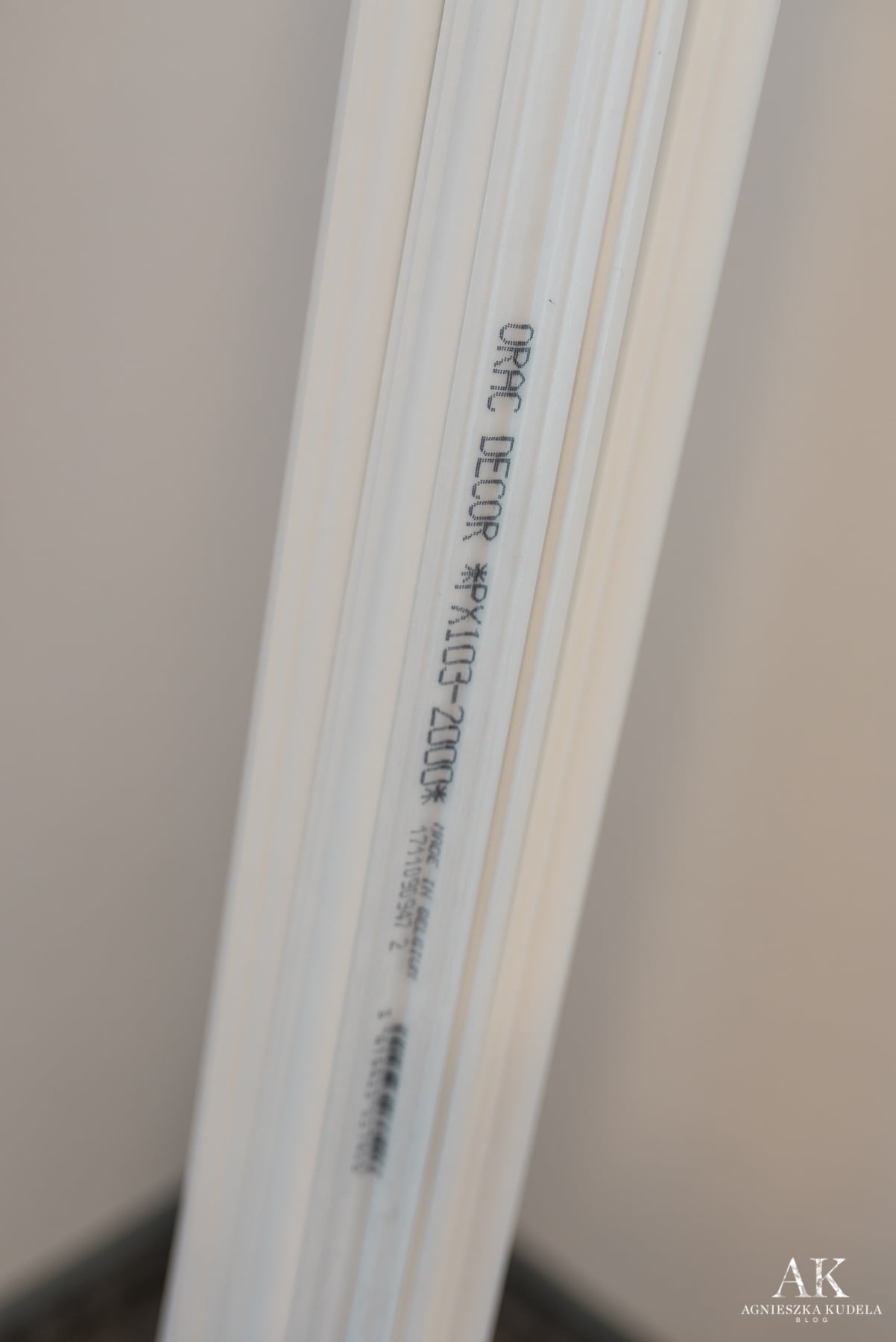 Stucco design on the wall

First, I measured our wall so that the stucco was evenly distributed. Me yours I made the plan in Photoshop, but you only need a piece of checkered paper.

In turn, I decided that:

The rest was calculated almost by itself - I marked 15 cm from the above-mentioned points, and then I divided the rest of the wall into equal intervals.

Although I chose three windows - I might as well have decided to two larger or one large. My idea was that the stucco would be the only decoration of this wall - that's why I wanted to make it more dense. 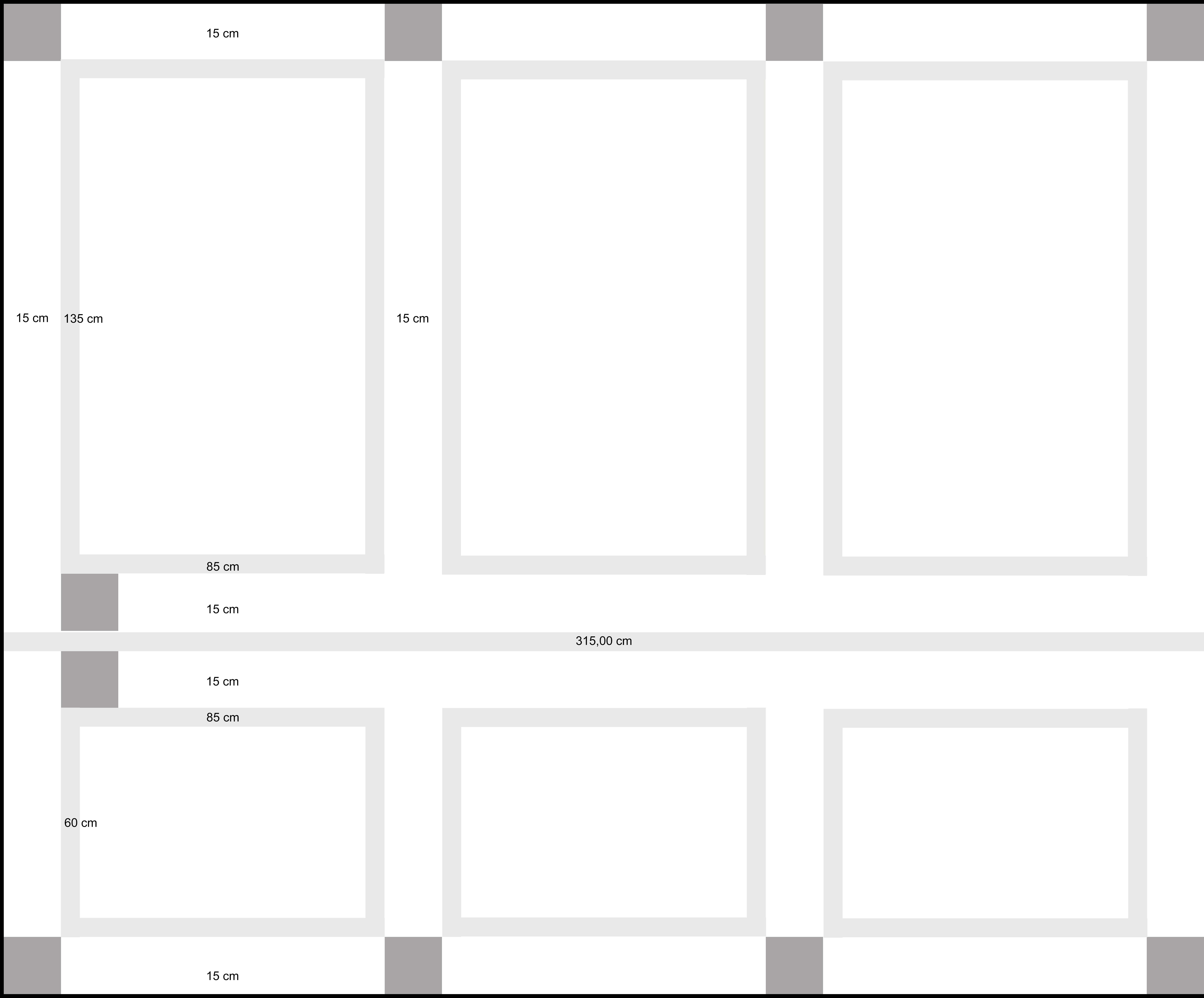 Thanks to my plan made earlier, I knew what length of the strip I had to cut.

How to cut stucco?

A very simple tool: using miter balls and boxesj for cutting at an angle - it is not expensive, it costs about PLN 7-10.

I cut the slats  to the correct length. I cut the slats that were intended to be installed on a horizontal line straight, and those that would create "windows" - at an angle of 45 degrees. 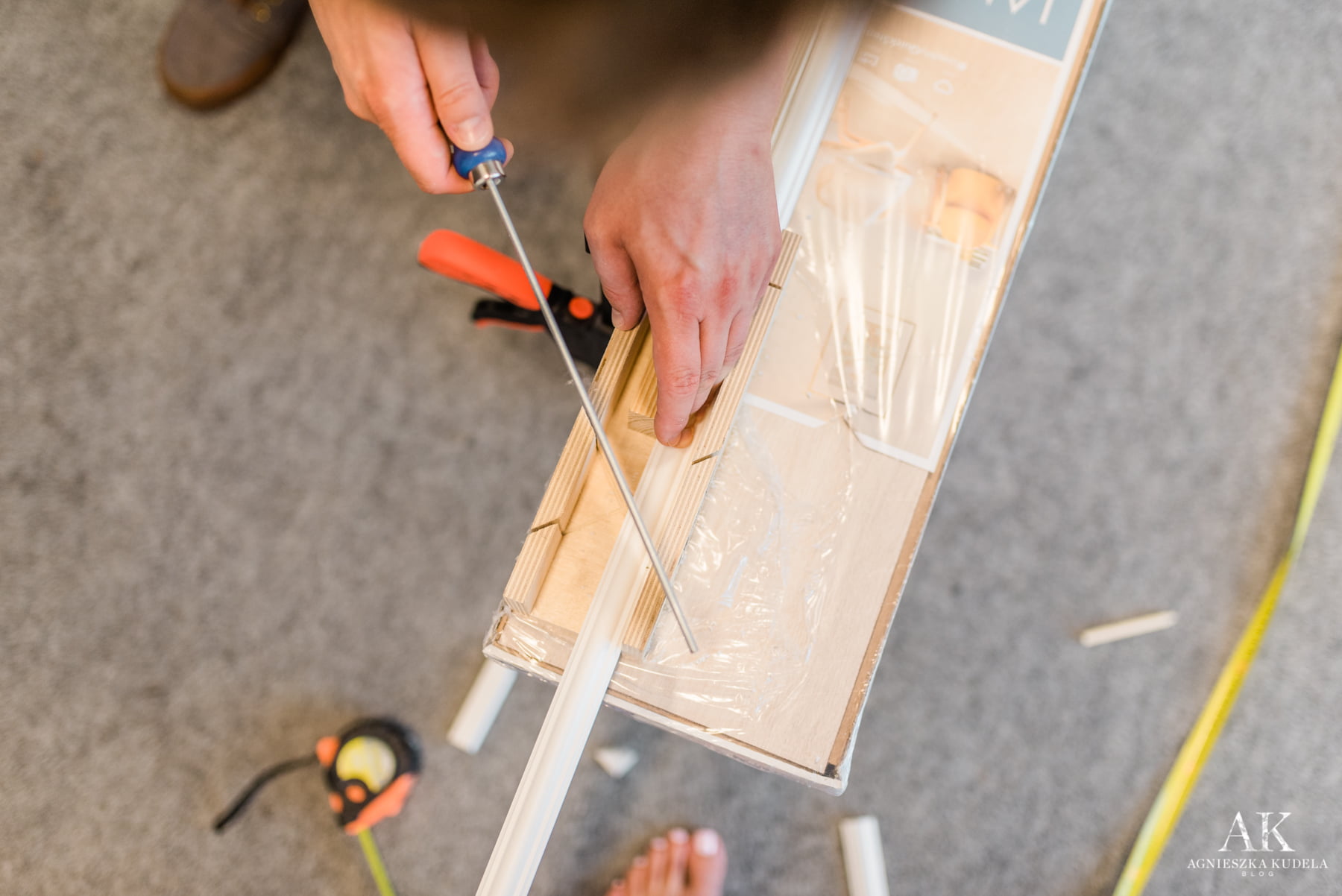 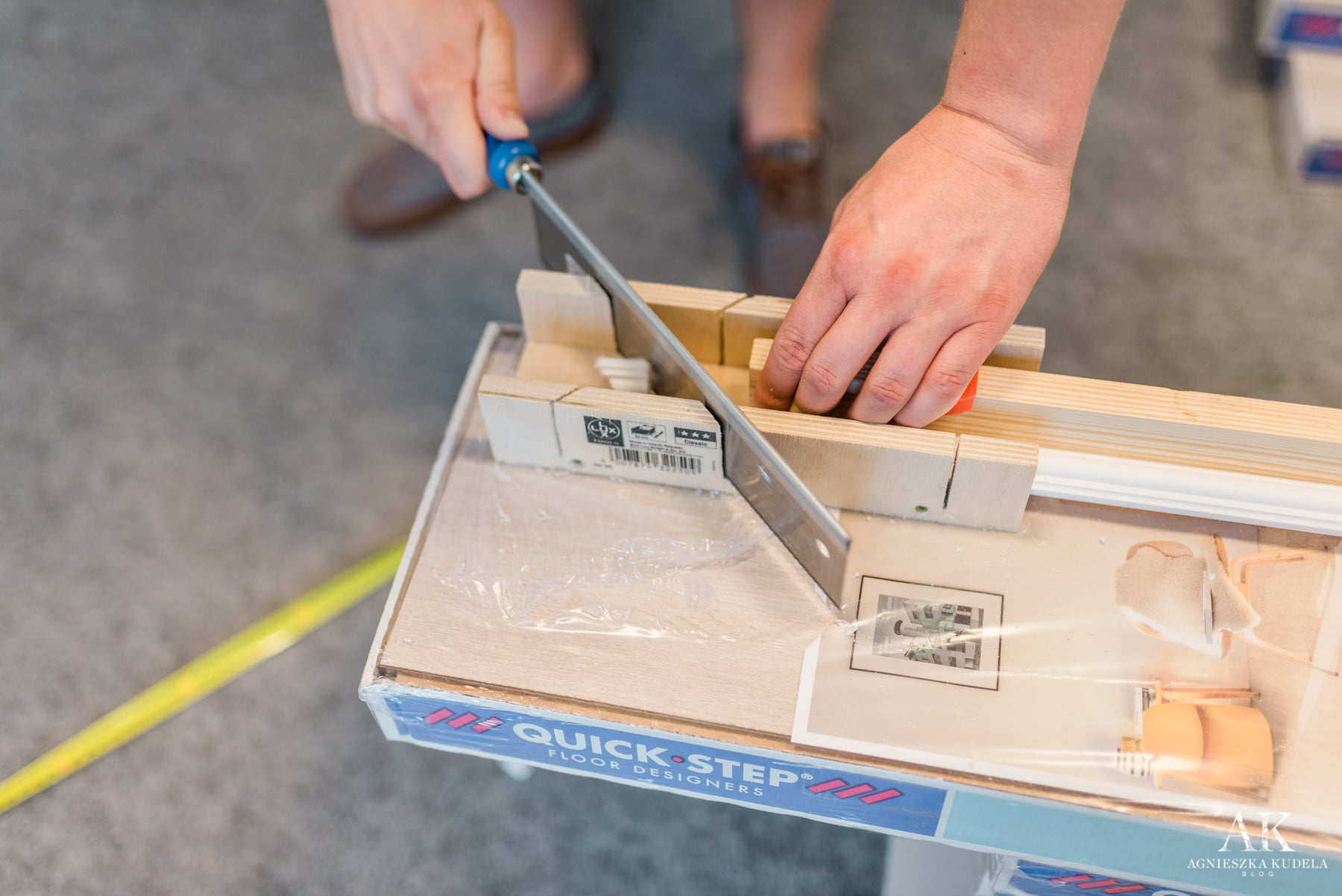 Another thing I did after cutting the slats was to scrape the cut to eliminate any inequalities - here I used a wallpaper knife. 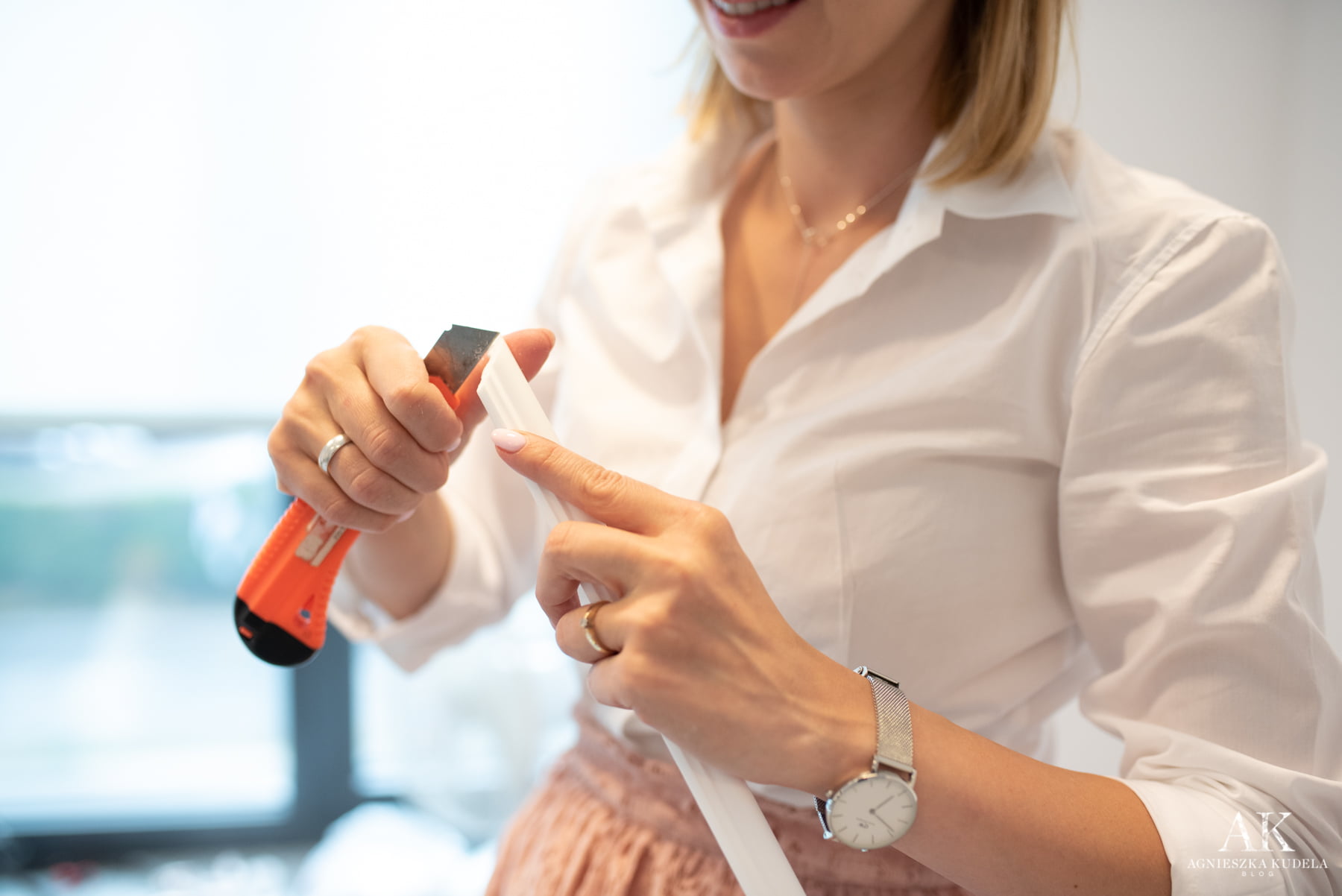 The most important device without which I cannot imagine this work is laser level. On an empty wall with a spirit level we were throwing a picture of the line in the right places (15 cm from the wall, floor and sides), and from the line we only drew the spaces that were to be windows. So from the wall 15 cm, then another 85 cm window, again 15 cm gap, 85 cm cm second window, another 15 cm gap, 85 cm third window and 15 cm to the next wall. 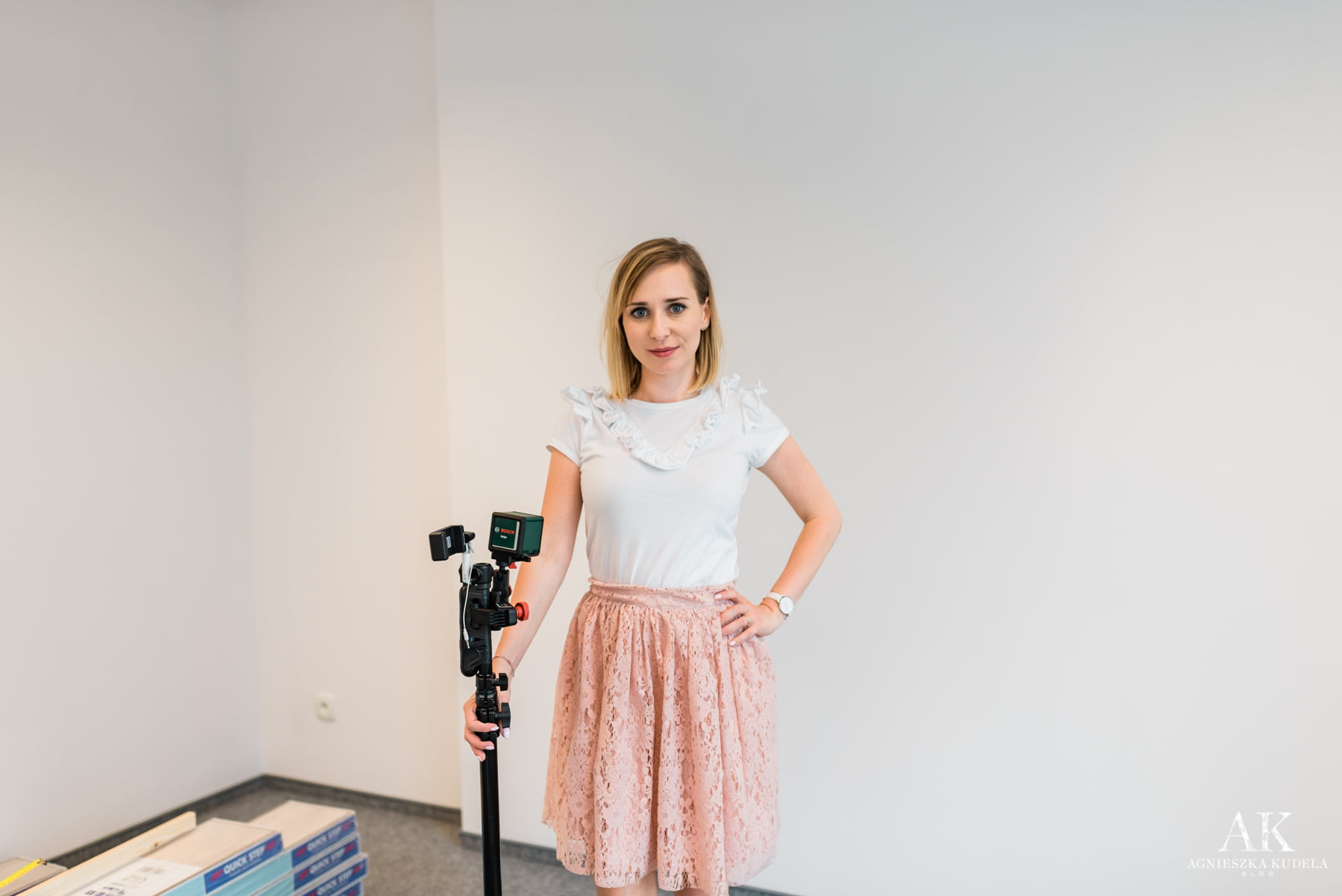 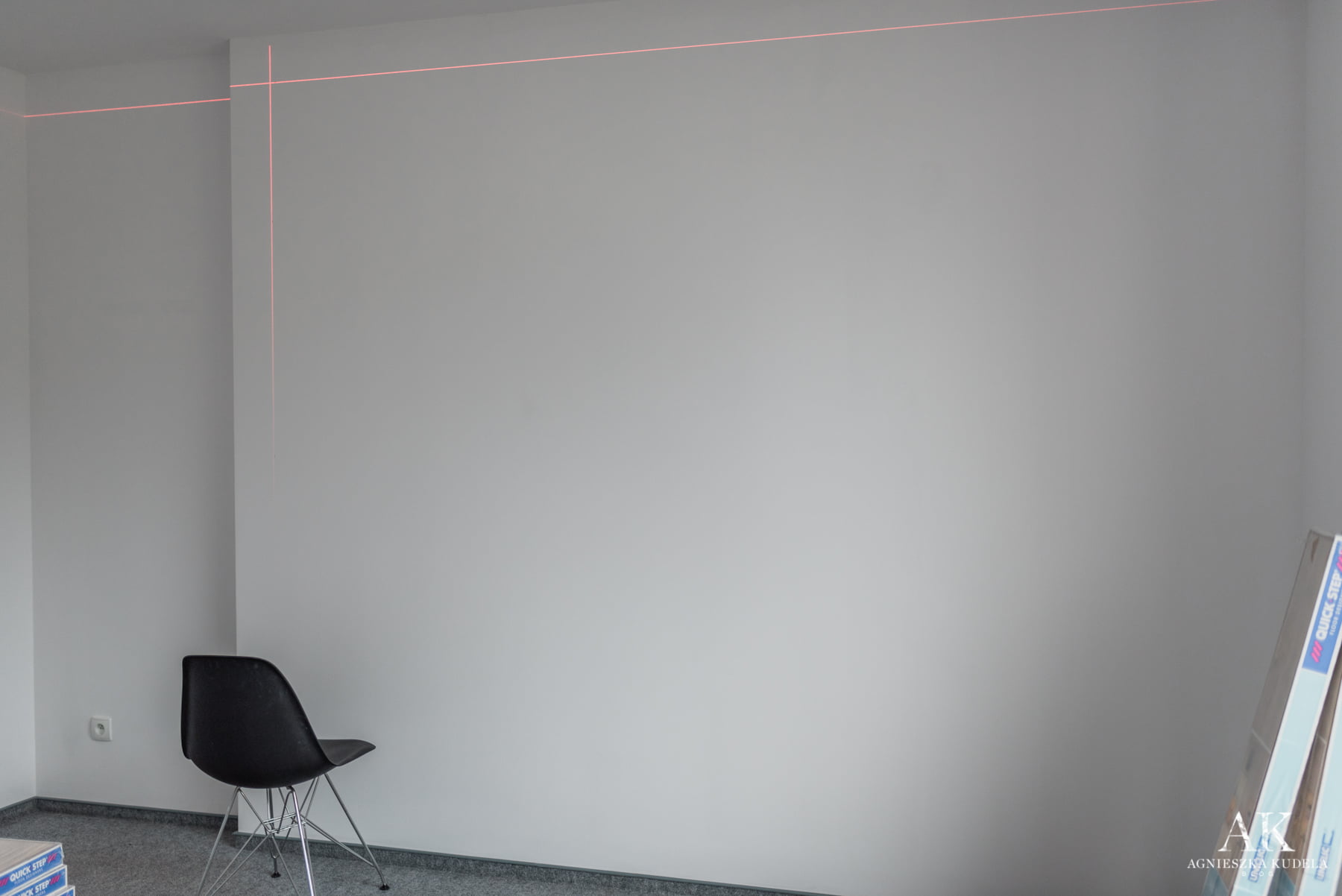 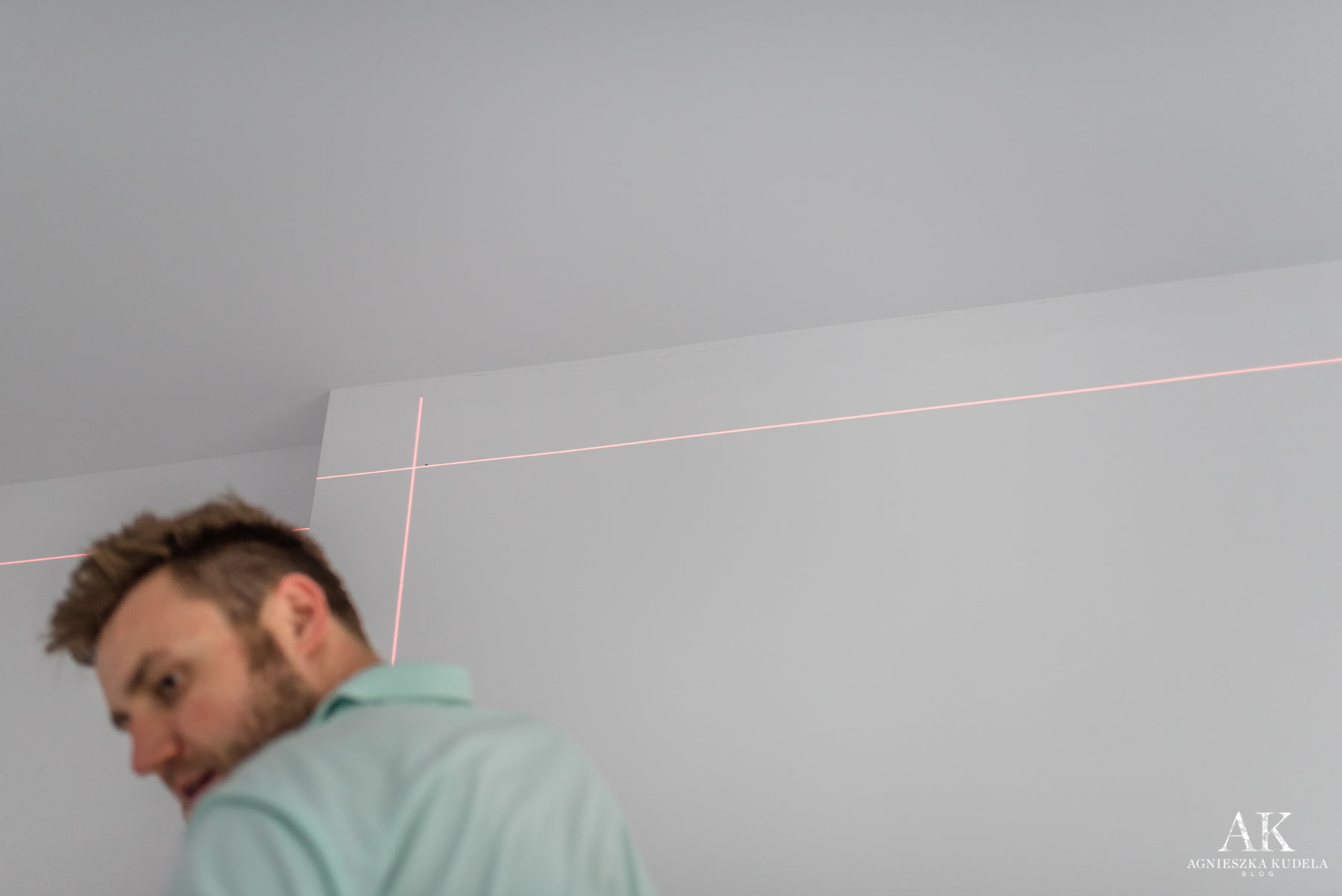 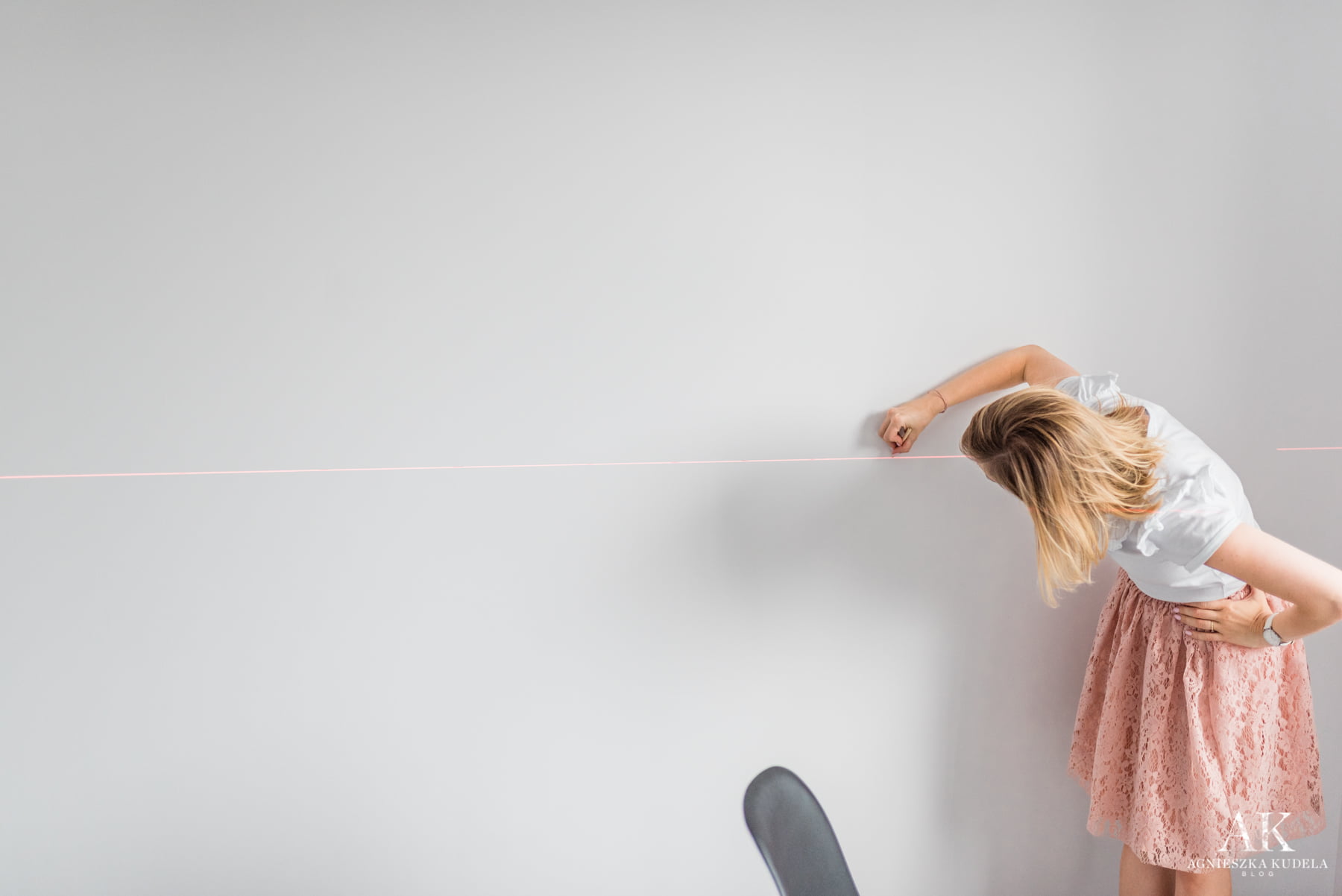 Gluing stucco on the wall

Once we had the lines, we started to stick the stucco on the wall. We had a gun for the gluewhich made it easier for us to attach. We applied mounting glue on the slats and pressed it to the wall in the right place long enough for the glue to hold tight - it was not more than several seconds. 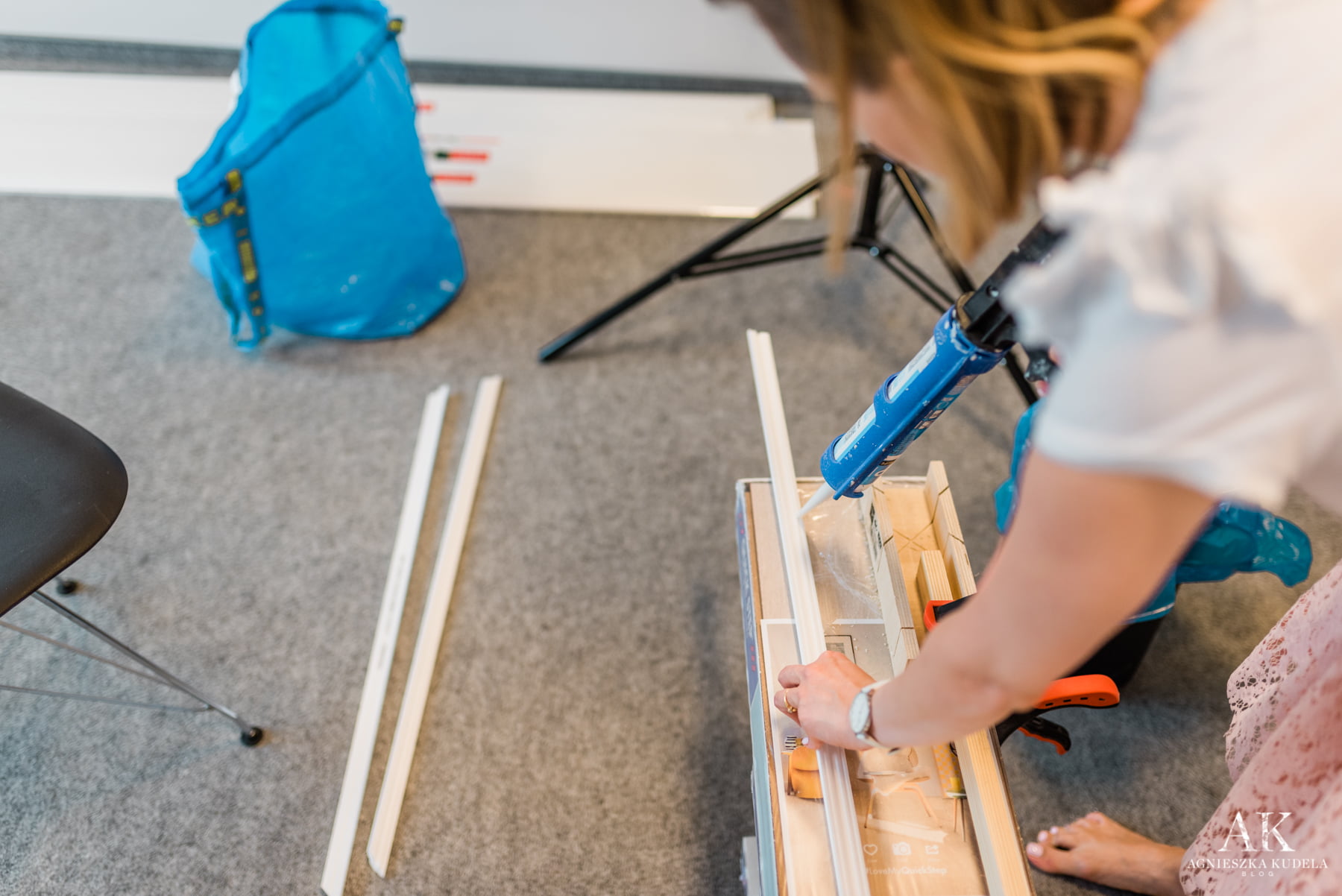 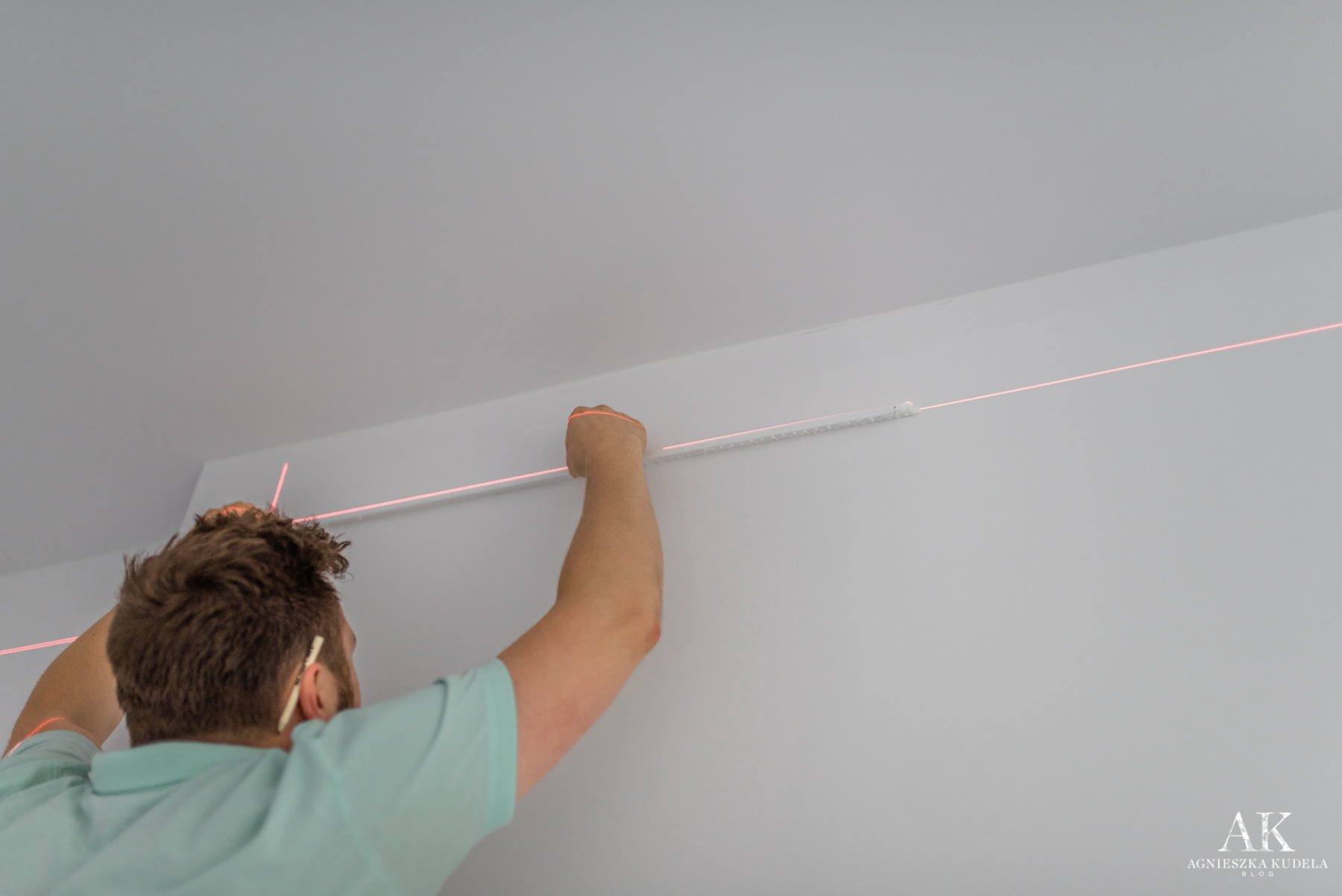 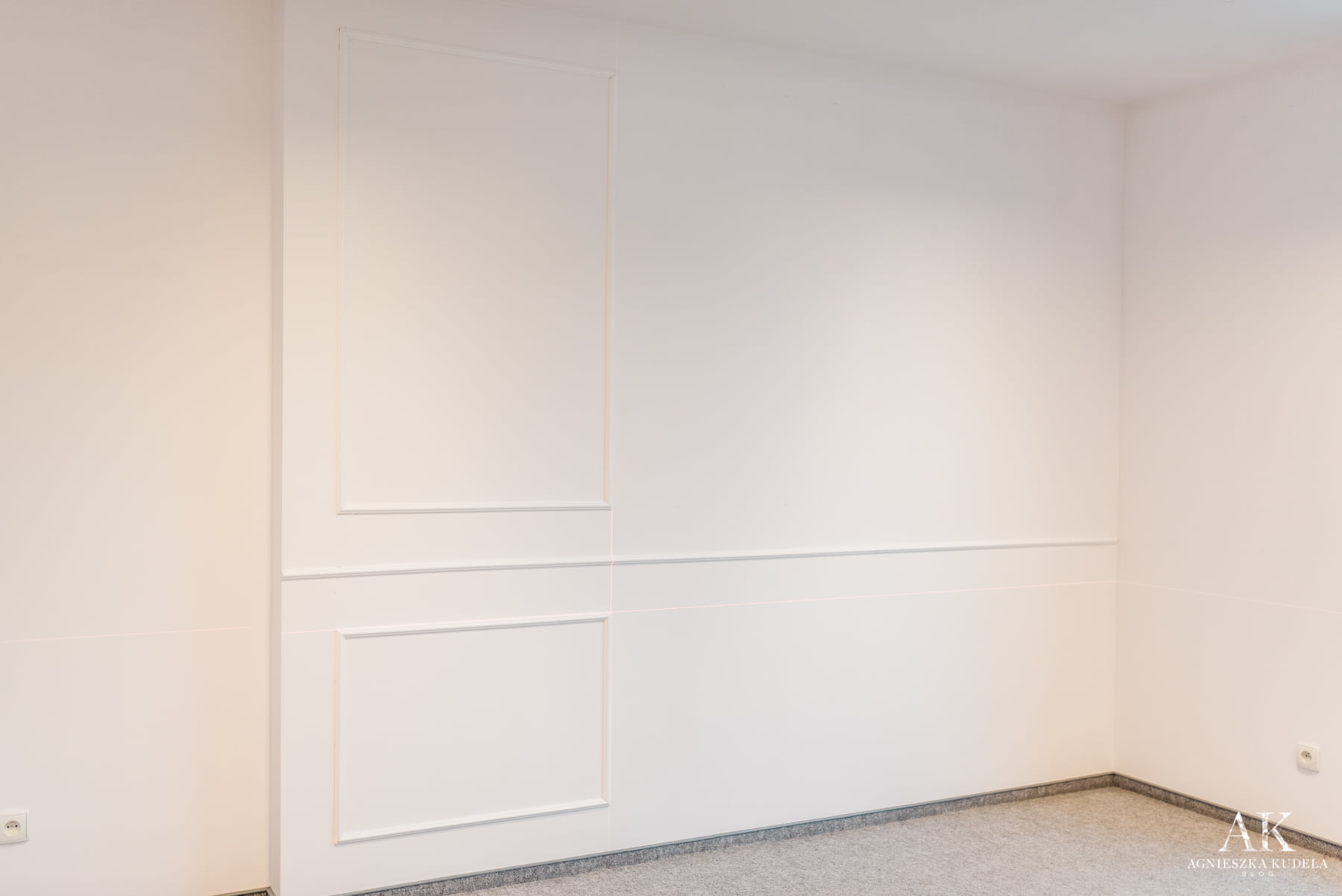 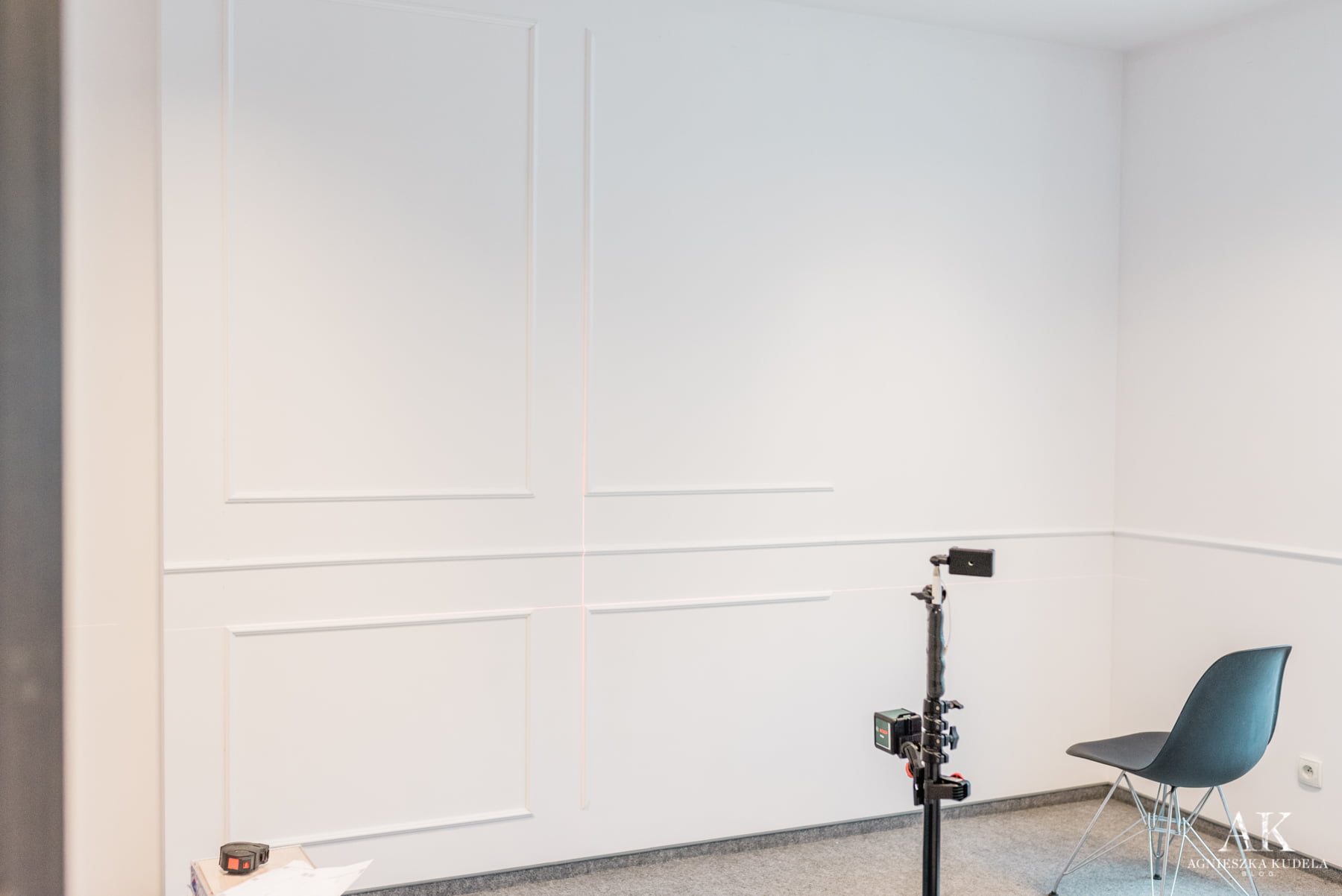 If there are any slits between the slats, in the joints, they can be painted before painting fill with acrylic. Fortunately, we did without it.

When we received the office, it had freshly painted walls, on which we stucco moldings. After sticking the slats themselves, we painted the brush with the same paint that was painted on the wall. We did this job twice for good coverage.

Can you believe that that's all? It only took us one afternoon! Is stucco in the salon already being created in your head? Or maybe in the bedroom?

How do I lower my anxiety? On this road again in

My first step in managing the perceived n

For stories, I started telling you our story

Are you looking for inspiration for a children's device room

From the perspective of the whole situation, I believe that I am most

Those afternoon sun rays in the bedroom, 17 '

You have remorse that the day off is allotted 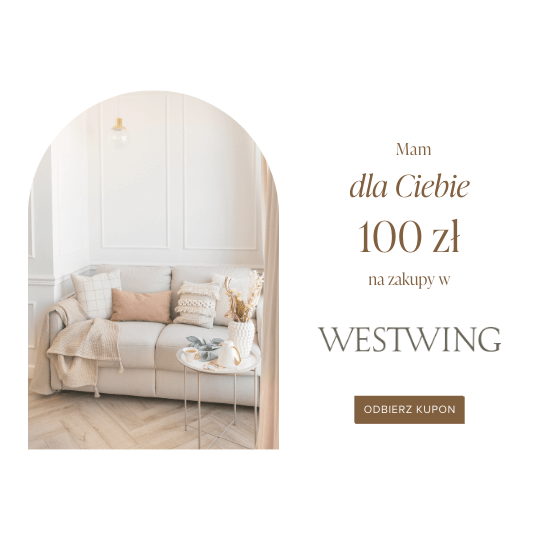