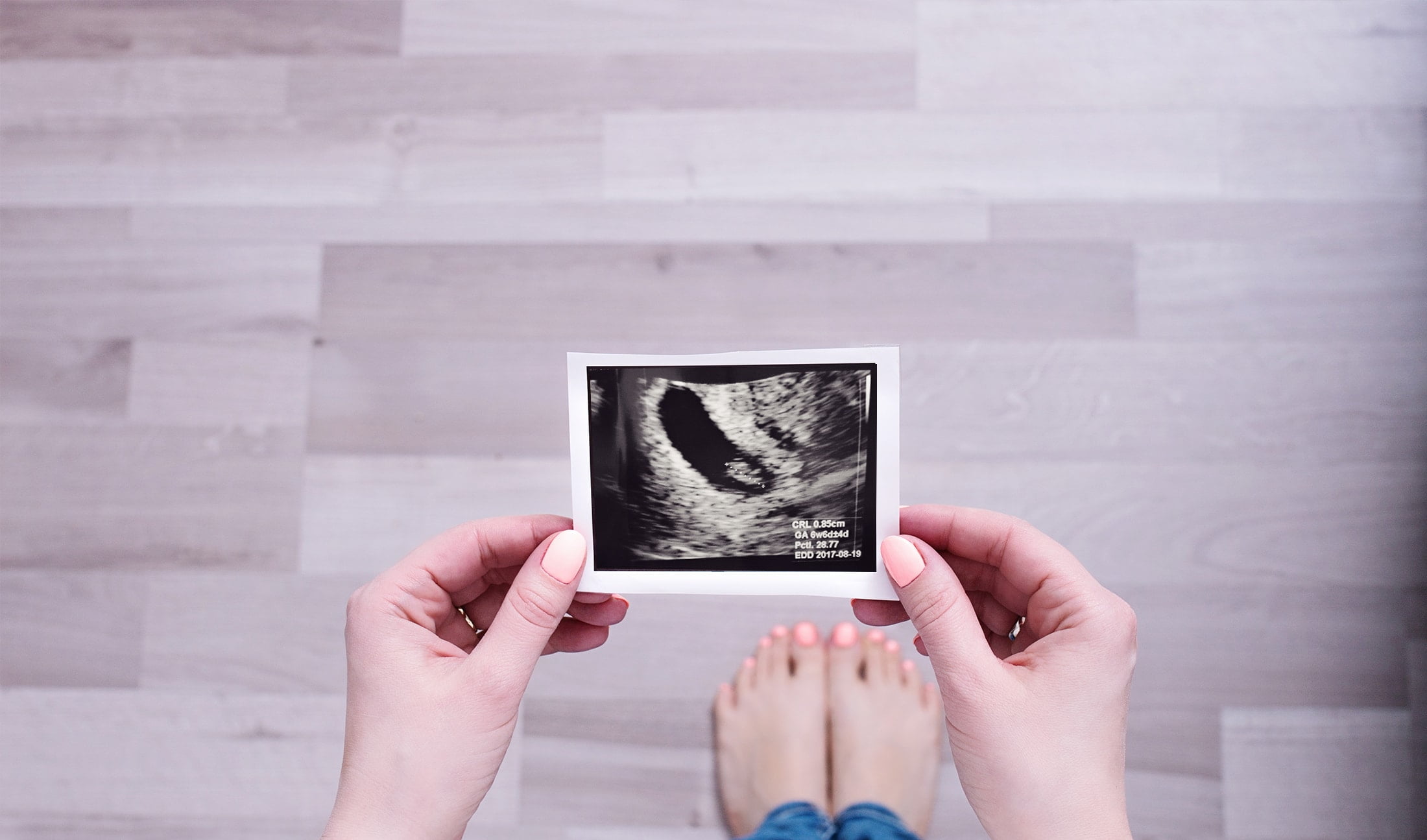 The second month of pregnancy is a month of tremendous change, plans and dreams, as well as fears and fear. The first visit to the doctor, the first tests, the first heartbeat, the first joys and the first ailments. How was it with us? What did we see on the ultrasound? What research did we do? Why did we end up in the hospital in the middle of the night?

How long is the second month of pregnancy?

The second month of pregnancy lasts from 5 to 8 week of pregnancy. It begins on the 29 day of the cycle, which for most women is the expected period. It is also usually one of the best dates for the first pregnancy test, although in practice we can see a positive pregnancy test on both a few days before the expected date of menstruation, and only a few days after, what exactly I wrote about here (you will also learn here which pregnancy test to choose, when to take a blood test and how I learned and told my husband about pregnancy).

Already in the 5th week of pregnancy, they started to pull me a lot groin. In the first days of pregnancy I was driving Course for a Wedding Consultant and choosing an outfit for the first day, I reached for proven solutions - shirt, skirt, high heels. During the course, I thought something was wrong - the pain in my groin was excruciating. I remembered when, while pregnant with Mikuś, I once went for a walk in Sopot's Monte Cassino in wedge-heeled shoes - they seemed to be great, stable footwear. After a few hundred meters… I had to buy the best flat shoes, because I couldn't walk to the car and I didn't want to go barefoot in early spring. Apparently pregnant high-heeled shoes are not for me - I see expectant mothers in such shoes, but I think it is not really healthy or safe, especially in this state. I was laughing because after many years I finally bought myself two pairs of winter boots with heels, which were in cardboard boxes during their first winter. But no regrets :-).

Pulling in the groin was initially my only pregnancy symptom. In the first and second pregnancy, which I lost, among the first symptoms I also had only groin pulling, while pregnant with Mikuś, which I happily reported, I had a lot of nausea almost from the very beginning, so I started to be seriously afraid that it was a bad sign. The worst memories came back. I was so worried that on the last day of the 6th week of pregnancy I sent a text message to my attending physician that I was so worried because… I feel too well: no vomiting, nausea as in the previous, only happy pregnancy. On the same day he received me for a moment and confirmed that everything was fine. I love him for the fact that he also cares about the well-being of future mothers and is always on the phone. And yes on the 42 day of the cycle, on the last day of the 6 week of pregnancy, I saw a beautiful pregnancy follicle on ultrasound and the embryo inside, yet without the heart. So, dear future mother, don't worry if your baby's heart isn't beating in 6 or even 7 week of pregnancy, it's completely normal.

Although it was our second pregnancy after two miscarriages, due to my thrombophilia, luteal insufficiency and too high level of NK cells, we were under careful medical care from the very moment we tried. In our case, it was the care of a miraculous specialist, a gynecologist, who saved our pregnancy with Mikołaj despite the fact that I had already come to him with an advanced miscarriage during the course of a miscarriage, which was discharged a few hours earlier from the hospital with the information that, unfortunately, "nothing more can be done. do". I also consulted all recommendations with an immunologist who has been looking after me for 3 years, but their decisions regarding treatment were 100% consistent.

Standard testsI did at the turn of the second and third month of pregnancy:

Research in the office of the attending physician and midwife:

At the turn of the second and third month of 8 and 9 week of pregnancy, I performed standard tests:

The tests I didn't have to do because I had them done in a previous pregnancy:

Custom testswhich I had in connection with thrombophilia, high NK cells and luteal deficiency:

The second month of pregnancy has ended bleeding i night visit to the Emergency Room, optimization of treatment to the situation. What a pregnant woman feels when she sees such a sight cannot be described in words ... The most important thing, however, is that bleeding in early pregnancy it doesn't have to mean anything bad or absolutely nothing bad. Personally, in such a situation, I always recommend contacting a doctor as soon as possible to calm down, get to know the enemy and take up a fight. In the previous, happily ended pregnancy, such a sight had touched me three times, but each time it turned out that despite the difficult situation, the pregnancy continued, and today I am a happy mother of a 2,5-year-old.

Birth certificate of the second month of pregnancy

What did I see on the ultrasound?

My weight at the end of the second month of pregnancy is 2 kg with a height of 61,8 cm.
My starting weight was 62,2 kg, so I noted 0,5 kg in minus. Relax, this is the last fall I've recorded. Later it was only harder.

Coffee - even talking to someone who had previously drunk coffee was a pain for me ;-).

Perfumes - all of them have been put aside, even the ones my husband uses.

Meat - so far I have been on a paleo diet, which mainly eliminates wheat and dairy products, and there is a lot of protein in it. In contrast, the first weeks of pregnancy rejected me from meat almost completely.

In fact, I could fall asleep at any time, in any position and in any place. Sleepiness is my middle name. In this topic, I felt the most the difference between pregnancy with the first child, when the expectant mother can focus fully on herself, from when 1, 2 or a few-year-old run around us and require care, play and attention. So I thought up as many games as possible on the carpet, because I just couldn't keep my eyelids open about 17-18 ;-). My husband helped me a lot here and as soon as he could take over the duties at 2,5 summer Santa.

I know, I know, everyone says to start taking care of proper hydration and lubrication of the skin from the very beginning of pregnancy, but I simply did not have the strength for it - see point above ;-). I am not a fan of creams and lotions at all, I can barely make sure to apply a face cream every day.

Mood swings they accompany me almost all the time. At one moment I am happy, and at the other I burst into tears. In one I am calm to light in the next in one second.

It all comes to this nightmare tiredness and drowsiness. I was able to go to bed with my son at 19:30 pm and only get up the next day. What's more, I have come to the office several times and… fall asleep in an armchair! And sleep like that for 2 hours. Once, when I was leaving after work, I sat only for a moment in my earhook chair, covered myself with a blanket and… fell asleep for the whole afternoon! Even the staff did not notice me asleep and locked me in the office when they went home. As a consolation… after completing the first trimester, this aspect has improved significantly.

At the very end of the second month I bought my pregnancy jeans. Too fast? All my previous models had a raised waist and were very tight to offer me a flat stomach effect. I was not as comfortable in them as I would like, and low-waist pregnancy jeans with soft material stretched on my tummy completely solved this problem. What pants have I chosen, will you check here.

Slowly, I started to visit children's departments in stores, but it was too early for my first shopping.

The aforementioned maternity pants and maternity tights - again, I had all the previous ones in a slimline version, and squeezing the belly is not on my list of desired pregnancy activities, even at this early stage.

What I like the second month of pregnancy for

For what I don't like the second month of pregnancy

For hiding ... we still keep this information primarily for the immediate family, but it is not easy not to say no.

For waiting - there will be an embryo or not, the heart will beat or not. Whether the results will be correct or not. Will the treatment be effective or not? The second month of pregnancy carries a huge risk of miscarriage, in my health situation the risk multiplies cosmically, which did not have a positive effect on my mood. I was nervous and every pain or little twitching caused me great fear. The relaxation techniques helped me a lot here.

Our favorite photos from the second month of pregnancy:

And what was your second month of pregnancy? How did you feel What did you feel Or maybe you are experiencing it?

Wedding Planner
i instructor
Mom of Three: 8-year-old Mikołaj,
5-year-old Maks and newborn Flo.
In love with life and her husband. A practicing gratitude author

How glad I am that in our previous apart

A romantic weekend for two, it's time for three to start

And we still don't see Christmas. On the sconce with