How to change a room in a few hours? Wallpapering - DIY or do it yourself 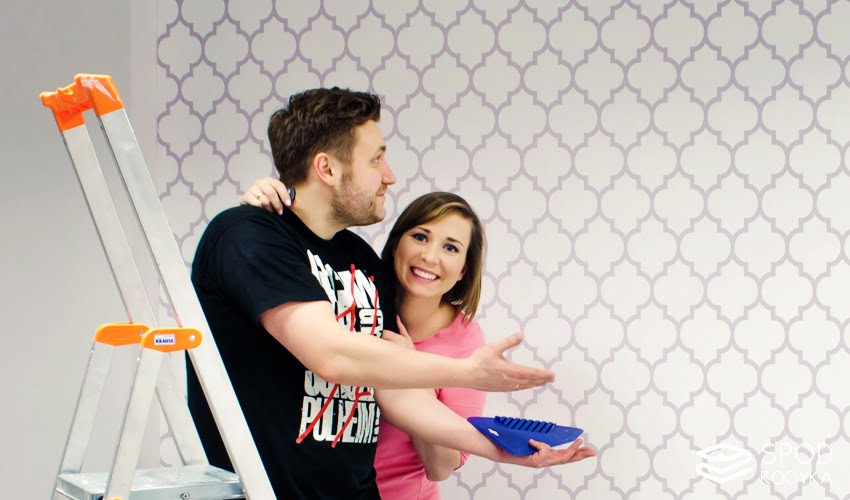 The times when entire flats were wallpapered, each wall in each room, each room with a different pattern are gone into oblivion ... However, papering comes back into favor and very often appears in rooms as one distinct element, changing the whole, giving it character. I decided to choose such a solution by arranging my latest office, which I am arranging, and I want to show you that wallpapering is not that scary. And the effect? Judge for yourself!

This list will change slightly depending on what kind of wallpaper you use. I ordered a non-woven wallpaper and I also recommend this to you - it lays down easily, does not require prior impregnation with wallpaper or soaking with glue, because this process is carried out on the wall. First things first. 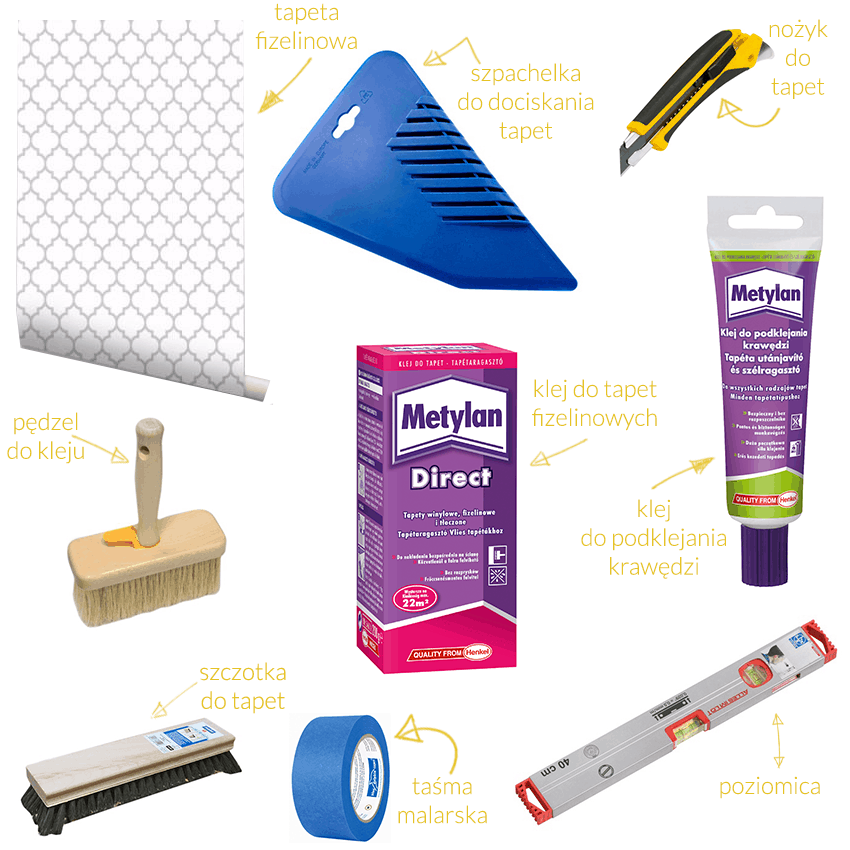 It is good if the wall is painted before painting - apparently then the glue has better adhesion, but many of you advising me on Facebook said that even without it, wallpapers placed immediately on, for example, kartongips stick perfectly. However, the wall should be as smooth as possible so that the irregularities do not reflect the wallpaper: 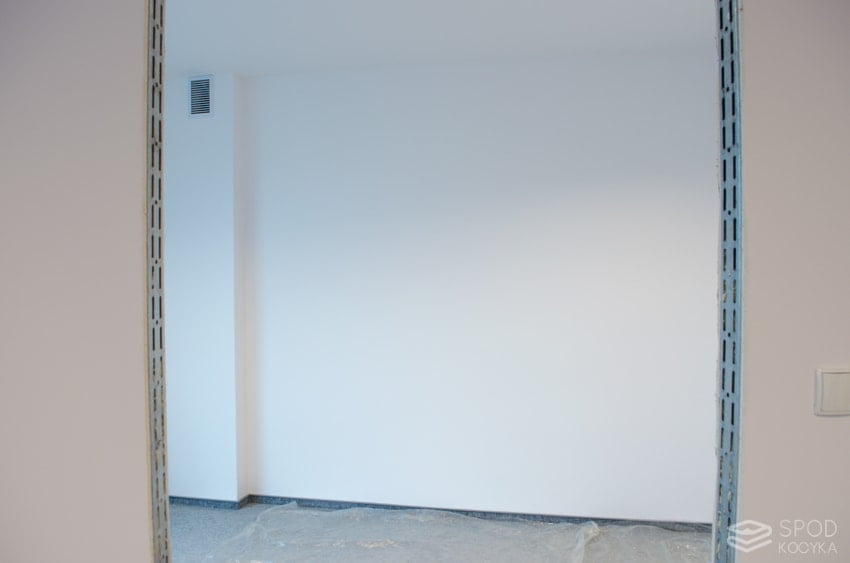 In order not to soil the adjacent walls, we decided to protect them with paint tape and cover the liner with foil: 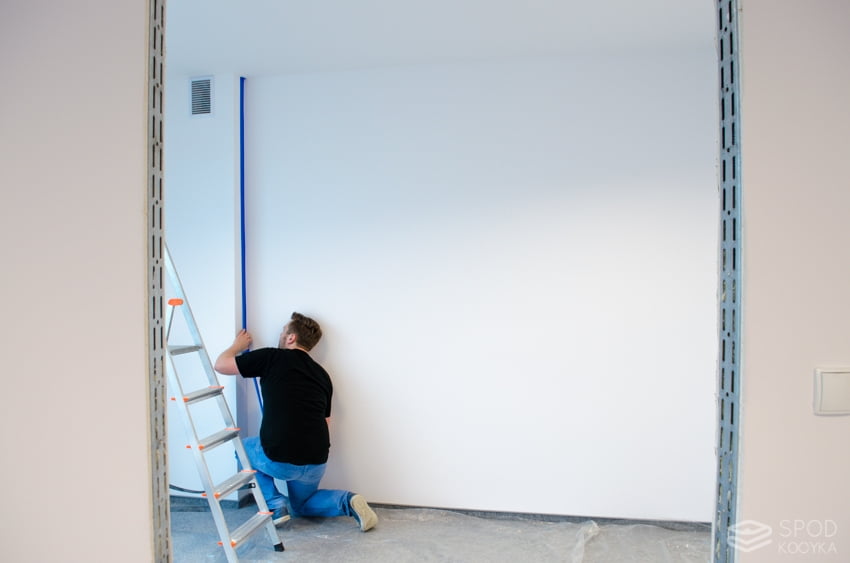 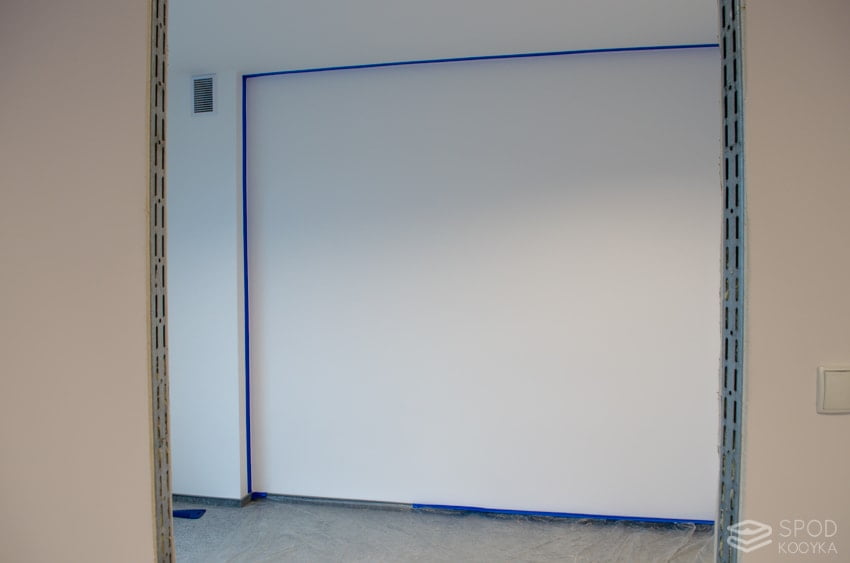 3. Priming the wall with glue 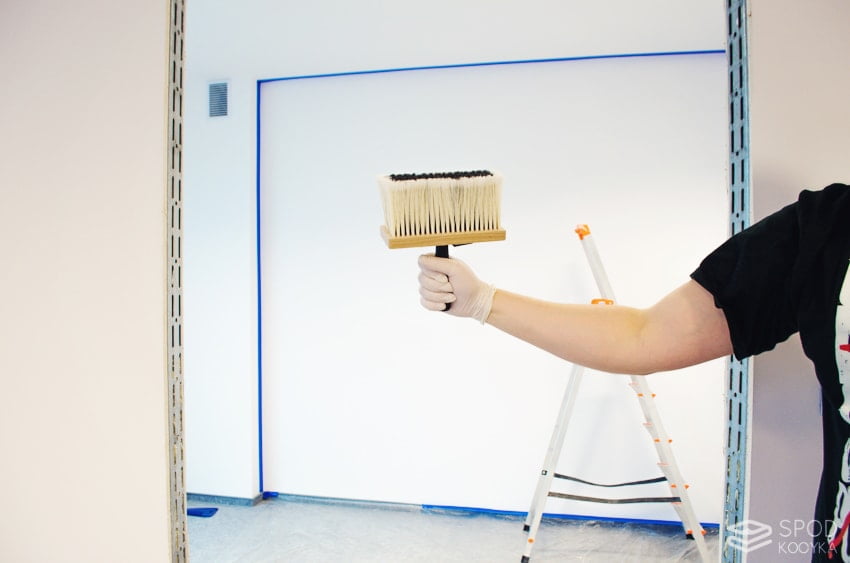 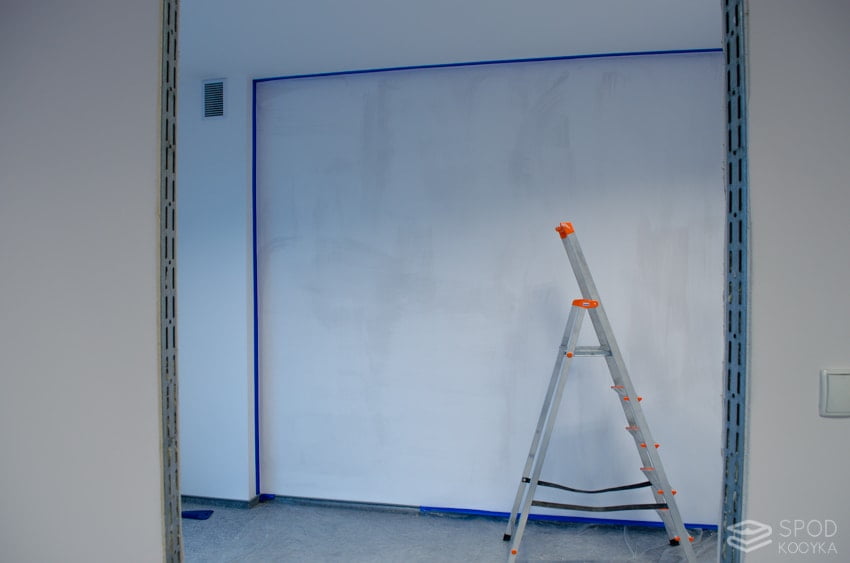 4. Applying glue to the wall

To glue wallpapers, you need to mix the glue again - this time in proportions suitable for gluing. We are getting ready to stick the first wallpaper on the wall. Our wallpaper was 100 cm wide, so we applied a layer of glue on a similar width strip on the wall. Do not be afraid to apply the glue very solidly - if you apply too much of it, it will flow out of the side when pressing the wallpaper without leaving any damage, but if you apply too little, you will get unglued spots, stomachs, or the wallpaper will fall off - like the first strip. 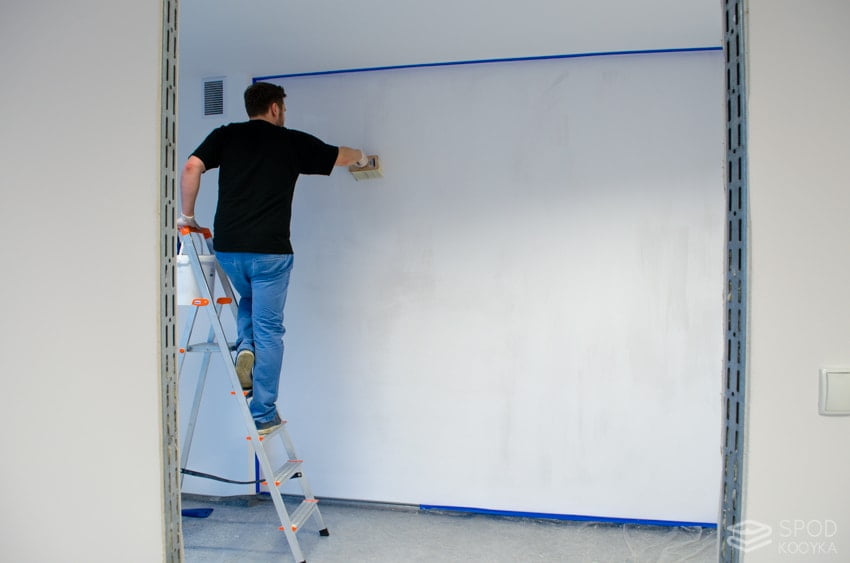 5. Sticking the first strip of wallpaper

The first strip of wallpaper is adjusted to the ceiling and the plumb line, which is defined with a spirit level, it may be helpful to stick a thread to the wall, which will mark the plumb. We dealt with the spirit level itself. 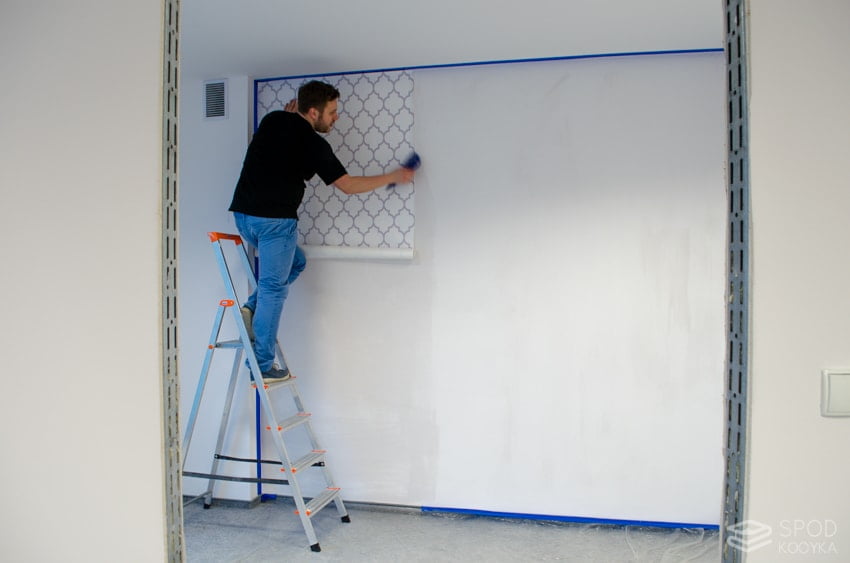 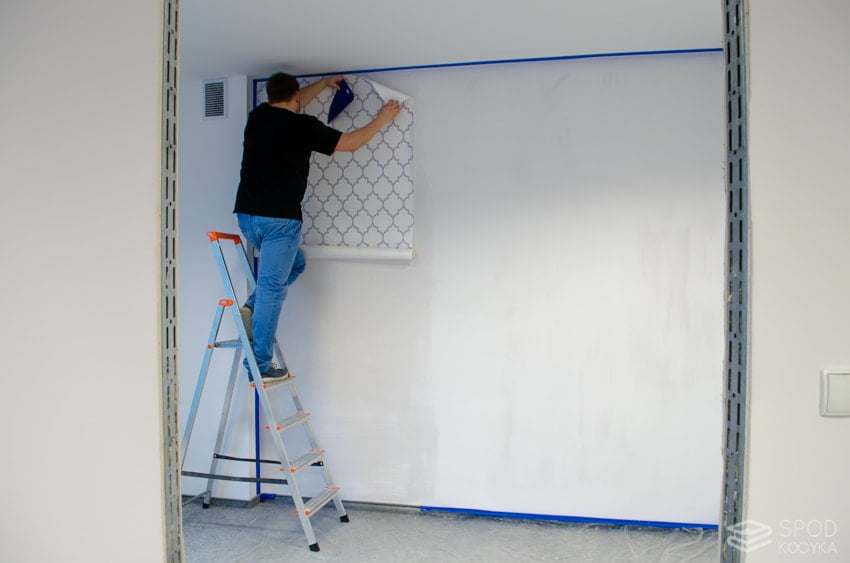 As I said - initially we didn't apply enough glue and after a while we had to start practically all over again: 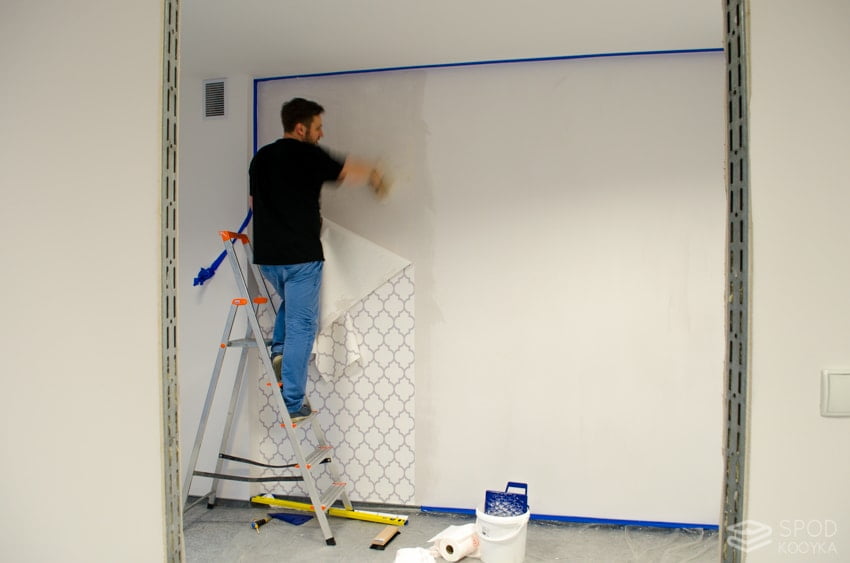 The wallpaper stuck to the wall should be pressed against the wall - you can use a wallpaper brush or a wallpaper spatula for this purpose - a spatula worked better for us. It is important to press the wallpaper from the inside out. And don't worry about the glue that will flow out from under the wallpaper - just wipe it off with a kitchen towel or a sponge. 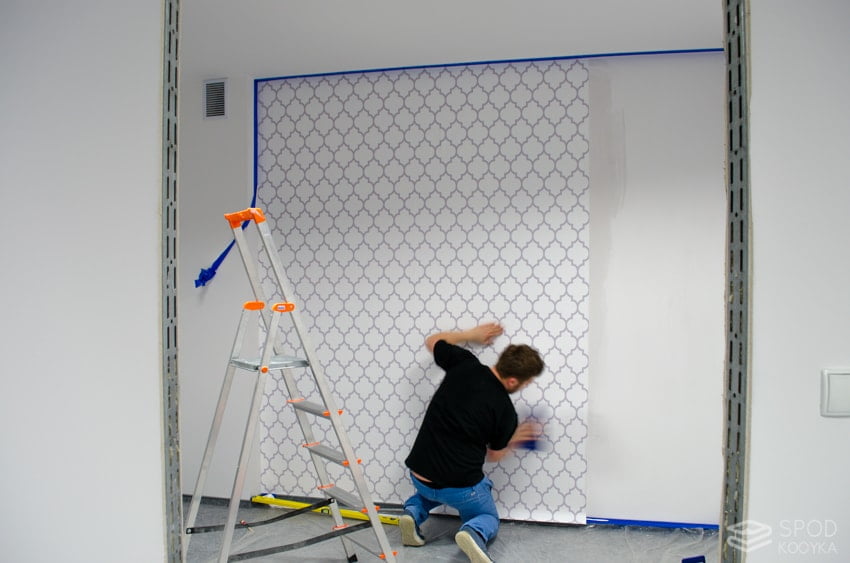 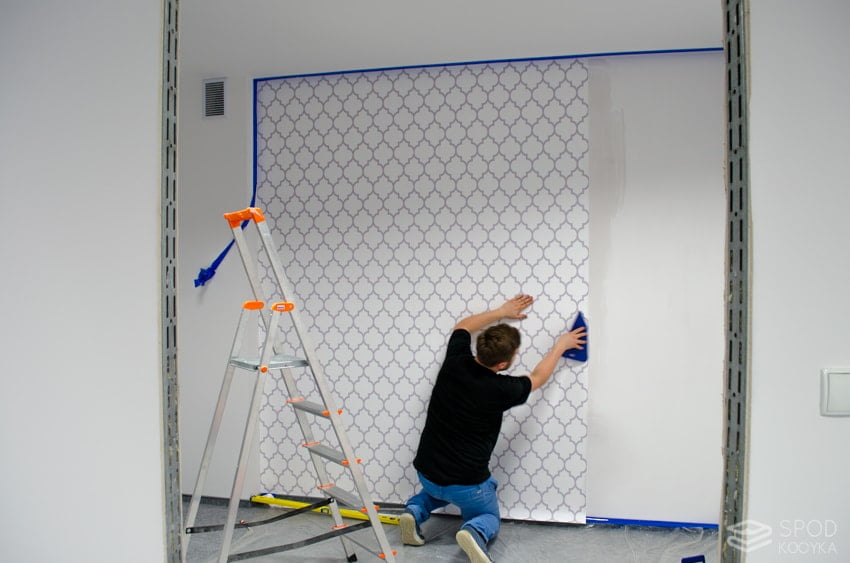 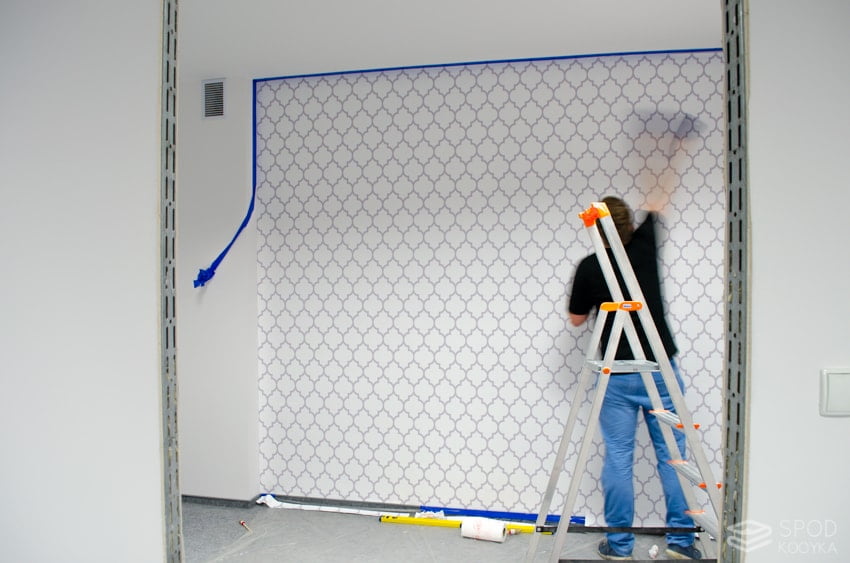 After gluing all the rolls of wallpaper to the wall, we cut it with a knife perfectly to the corners of the wall and to the floor strip.

All extreme elements of the wallpaper that did not stick perfectly should be glued with a special glue for gluing. Personally, I put it on my finger and glued the corners, as well as the entire upper and lower edge of the wallpaper and most of the joints. 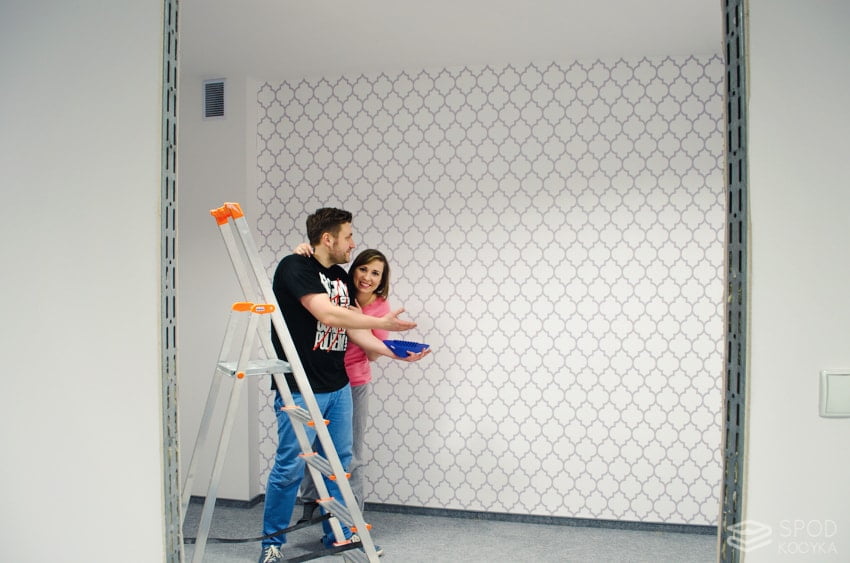 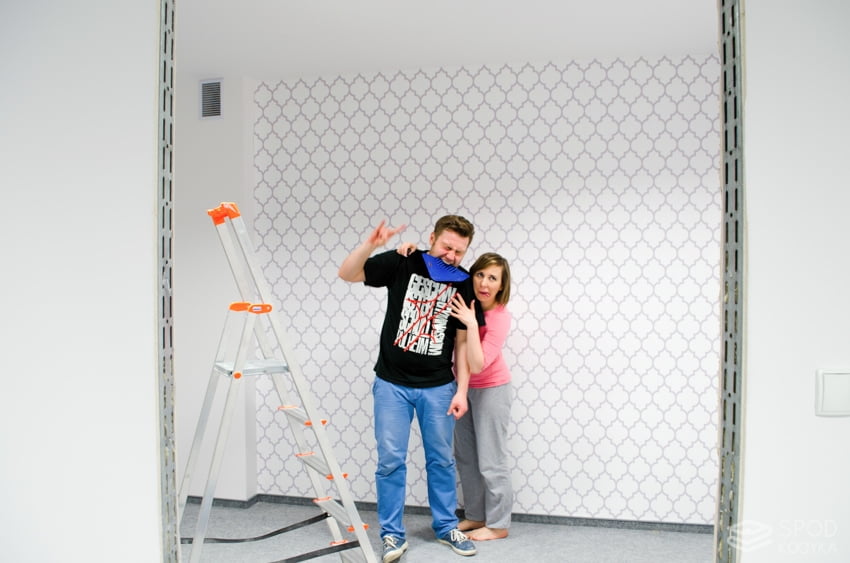 Our beautiful wall, which will give the whole room a distinct character, is ready! The next day it looked even nicer, although I admit that not all wallpaper joints are invisible, unfortunately in two places the effect could be a bit better, but the first cats behind the fences. After watching a few episodes of "Fault", I'm really satisfied!

And I have my wonderful selfie background 😉 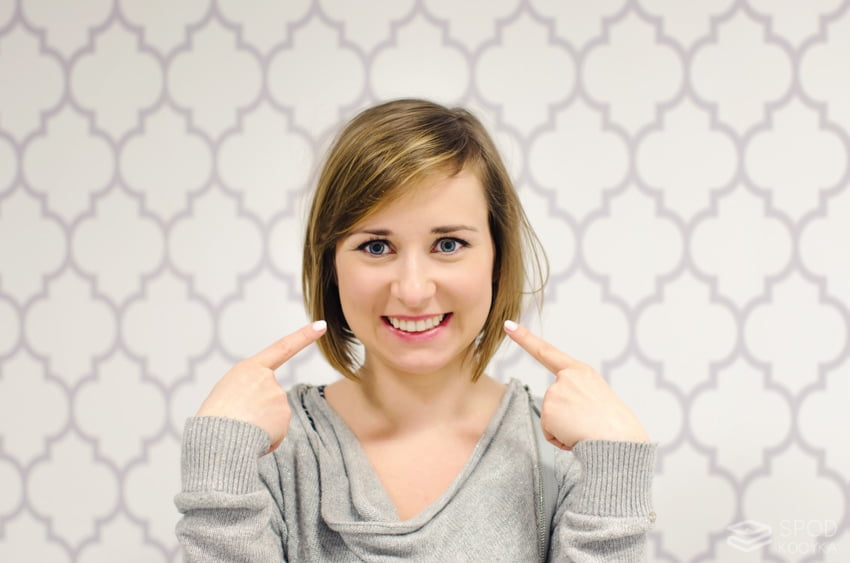 How do you like this way of changing the interior?

I am still waiting for the transport of the last ordered furniture and I hope that this weekend we will start moving into a new office. Keep fingers crossed!