How to tease a child? 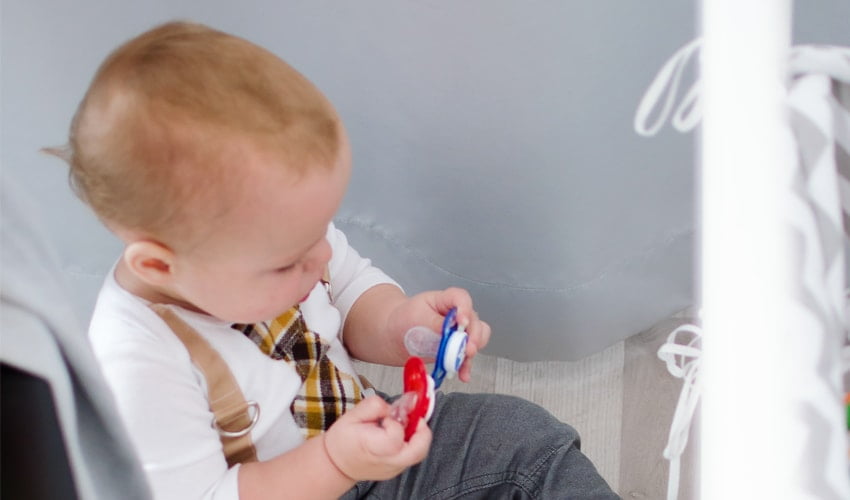 Are you wondering when is the right time to tease your baby? Would you like to try it, but don't know how to go about it? Check out our history.

Apparently, the first good time to soak a baby is about 7 months, when he starts to sit up and is interested in everything around, when it is extremely easy to distract a child's attention. The next good moments for such steps are the next important steps in the child's development - learning to crawl - independent movement, learning to walk. In our case, our son still seemed so tiny and not ready that we allowed him to enter the age of 2 with a pacifier.

Step 1. Zero pacifier during the day

That was by no means the assumption - the pacifier was supposed to be only for sleeping. Both during the day and at night. In practice, we also gave it to our son when he had bad times so that he would calm down more easily, and when he asked for it himself - the word "didi" was quickly found in our son's dictionary.

Although the dummy was supposed to be only for the night, it was still in the kindergarten backpack, just in case. We tried not to take it for walks or car rides, at least officially, but we always had (or a few) in stock, often using it.

In practice, my son absolutely could not fall asleep without a pacifier. During the evening milk, the soother had to be in the hand, ready at the post. Ideally, there were two pacifiers for sleeping - one in the mouth and the other in the handle. There were breaks in drinking the milk for the needs of "tickling" the teat.

Before our 2nd birthday, we had a serious conversation with my son. Actually a monologue. The main theme - "didi" is to sleep and after getting up from bed we leave him on the pillow, where he waits for our son until the next bedtime. The pacifier stopped going on trips with us, we didn't take it for a walk or a ride (and we never - or almost never - admitted it). Eventually, he stopped living in a kindergarten backpack. For each request for a pacifier, we replied that the pacifier was waiting in the crib, and when it was time to go to bed, it was time for didi. It was still compulsory to sleep. It coincided with the Friday teething. It turned out that biting the pacifier was a great relief for our son, and we had a hole in the budget - one pacifier lasted a maximum of 2 days, after which it broke into its first parts, which began to be very dangerous, because you can choke on such a bitten teat.

One day we decided to take the opportunity and not buy another, new soother. Once again we had another serious conversation (monologue) that the last "didi" was bitten, it has a huge hole through which it is not suitable for my son, and we do not have any more soothers. A dummy with a cut off tip was used as a prop - we cut off the bitten tip for safety reasons. When it was time for bedtime, it was time with her to pray and weep. We were with my son all the time, calmly explaining to him what had happened, showing the destroyed "didi". We hugged him, said we understood his grief and that we were with him.

The first night without "didi" My son fell asleep stroked on the back by Dad about 2 hours later than always. However, he woke up around 3 am and here the translation did not help, and my son decided to take a pacifier with the tip cut off.

The second night without the pacifier was full of prayers again, and Sonny fell asleep in my arms and slept again at 3 at night. At that time, however, we did not give up and did not even give a damaged pacifier, which resulted in hugging and carrying our ball of sadness to 5 in the morning.

The next night Son fell asleep cuddled and kissed in the cot alone, but on condition that one of us had to be in the room with him. He was so vigilant that he could sense the moment of our evacuation even through his sleep. However, there were no requests for a pacifier in the middle of the night.

Each subsequent night meant a shorter and calmer falling asleep, and during the day ... more tenderness on the part of the child towards us. When I think how much of this tenderness has been getting to a piece of rubber so far, I think that if we become parents again, we will try not to give the baby a pacifier at all. Unless, like Miki, he starts sucking his thumb ... I prefer to wean the Baby from sucking a pacifier (I can always take it) than his thumb.

I was terribly afraid of all this dipping. I had a vision of sleepless weeks and lamentations in my head, and in practice, although we are far from a story in the style of a child, I think that there was nothing to be afraid of, and the hours devoted to the entire process have already paid off in the form of tenderness Baby and smaller straps for a crooked bite in the future, not to mention the savings in the cost of buying teats in bulk during teething.

Therefore, if your intuition tells you that this is the right time, and before making a decision you are mainly blocked by fear, I recommend: try it today.

And is your baby a fan of a pacifier? Are you thinking about draining? And if you have already completed this process, be sure to share your advice with us here - every Child is different, so each advice is worth its weight in gold.

Flo - you are finishing the week today! 🎂 Throw in