The first month of pregnancy. For some it passes completely imperceptibly, for others it lasts forever, lasting many months or even years. Sometimes it is the result of complete spontaneity or, on the contrary, of intense, planned effort. How was it with us? I invite you to the series of posts "pregnancy month by month".

How long does the first month of pregnancy last?

It is assumed that the first month of pregnancy is counted from the date of the last menstrual period and lasts 28 days, which is equal to four weeks. When our pregnancy is one month old, our baby is actually only a few or a dozen days old - counted from fertilization.

Whole pregnancy lasts 40 weeks, so you can already see that the pregnancy counted from the first day of the last menstrual period lasts closer to 10 than 9 months, which was an unpleasant surprise for me, sitting like on high heels, counting the days until its happy ending.

When is the best time to do a pregnancy test?

As a standard, a pregnancy test is recommended only on the day of your expected period. Sticking to this deadline, if you have at least 28 day cycles, you will learn about your pregnancy in the first days, but in the second month of pregnancy.

In practice, a positive pregnancy test can be seen both on a few days before the expected date of menstruation, and only a few days after. Why?

It all depends on which day of the cycle we had ovulation, how quickly the fertilization and implantation of the embryo in the wall of the uterus took place. Both home (from urine) and laboratory (from blood) pregnancy tests detect presence in the body HCG - human chorionic gonadotropin, a hormone not produced until 24 hours after implantation in the uterine wall. For this to happen, ovulation must first occur, which should occur at least 12 days before the expected period, but it can also be different. Stress or travel can disrupt even the most regular cycle. The egg can only be fertilized 12-24 hours after ovulation, after which time the unfertilized egg dies. The fertilized egg still has to travel to the uterus and establish itself there, which usually takes 5 to 10 days, and some sources say up to 12 days.

Thus in practice, you can count on a positive pregnancy test both a few days before and only a few days after the expected period, it all depends on the day you ovulated and implanted. If you are pregnant, the later you do a pregnancy test, the greater the chance that it will be a positive result.

Due to the fact that the level of HCG hormone in the initial period doubles every two to three days, the first test line that appears on a test done around your expected period may be very pale, but this does not interfere with the interpretation of the pregnancy test result as positive. Repeated test of the same brand the next day will probably give a darker second line.

What home pregnancy test should you choose?

We stand out among home pregnancy tests strip, plate and stream.

Personally, I have never used pregnancy test strips for a very simple reason - I wanted a nice souvenir, so I chose the plate and stream ones, which are much more solid and probably better survive the years in the "chest of memories".

How and when to do a blood pregnancy test?

The principle for calculating the day of a blood pregnancy test is the same as for the home pregnancy test, but the result is even more reliable.

Beta HCG is a subunit of HCG, and therefore its constituent part. Colloquially, we talk about the HCG result, while in the test we determine the value of blood concentration just bHCG. Regardless of whether you order an HCG or Beta HCG test, the ladies at the counter will know what test to perform.

You can test the Beta HCG level in almost any laboratory, you do not need a doctor's referraland you will pay about PLN 25-45 for the examination. You do not need to fasting and you can do this test at any time of the day. You will wait for the result from several hours to several days - in large cities and large laboratories, the result will be only 2-3 hours and it will be available on-line, which is extremely convenient and allows you to keep the privacy and intimacy of the moment. On the other hand, in many small towns and laboratories, where orders for this test are proportionately few, although blood samples are taken from patients every day, the test is performed only 2-3 times a week, and the results are usually issued on the spot.

A single elevated Beta HCG result indicates pregnancy, but it doesn't indicate whether pregnancy is developing properly. To determine and substantiate this, you must do it re-determination of Beta HCG in the blood of 48-72 hours later, and the result should generally double. If the result has increased much more, it can indicate a twin pregnancy. Too slow growth may indicate an ectopic pregnancy or may be the first worrying pregnancy parameter.

Beta HCG increment in time you do not have to specify yourself, you can use ready-made online calculators. For example, my results were as follows: 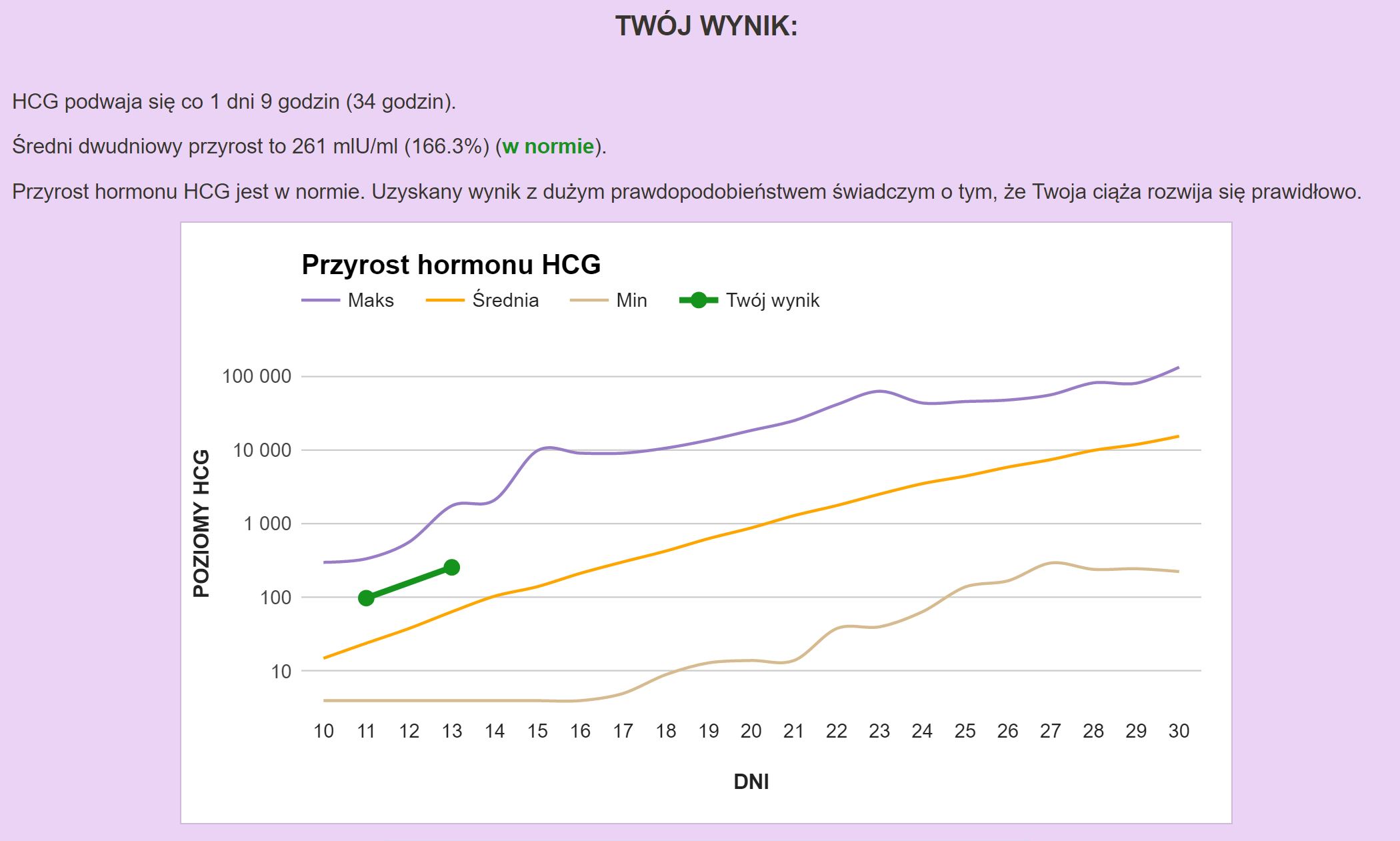 While the blood pregnancy test is more reliable, in our first pregnancy, both the platelet and the laboratory tests came out negative on the first day of testing. However, after two days, both the plate test with a sensitivity of 25 mlU / ml and the laboratory blood test gave a positive result. So in our experience, both types of tests are equally effective and give us information just as quickly.

How did I find out and tell my husband about pregnancy?

In the first pregnancy, while waiting for a positive result, I performed pregnancy tests myself. I also went to the blood test in secret and prepared a real surprise for my husband (I think that this material is just right for a separate post). Thus, the topic of surprises is already behind us, so each time we waited for the joyful news together, staring at this small piece of plastic and counting down to three minutes.

This time we were expecting to be pregnant for the fourth time, as always, we had a lot of pregnancy tests of all brands on hand and high hopes. The day before, we set the alarm clock for 5:00 - it's an hour earlier than we should get up to work, so that in case of a positive result, we could stay in bed and enjoy the moment.

It was our second month of effort, 27 day of the cycle, name day of Mikołaj, so of course Mikołajki. We specially chose this day to do the test because we deeply felt that the best gift was waiting for us. In the morning we did the first platelet pregnancy test and it was then, at 5: 05, that we saw the pale scarlet, the second dart. It was a wonderful moment when we learned that we became parents for the fifth time.

After a while, we repeated the test and enjoyed the view: 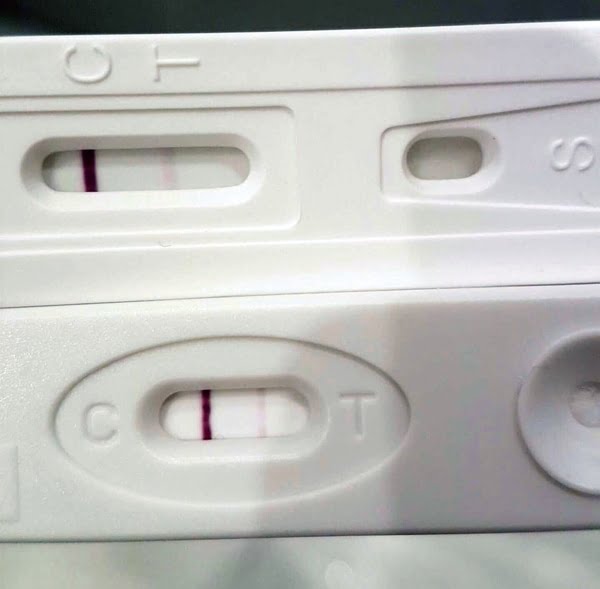 And these are our first photos, taken when I knew I was carrying the Next Life. 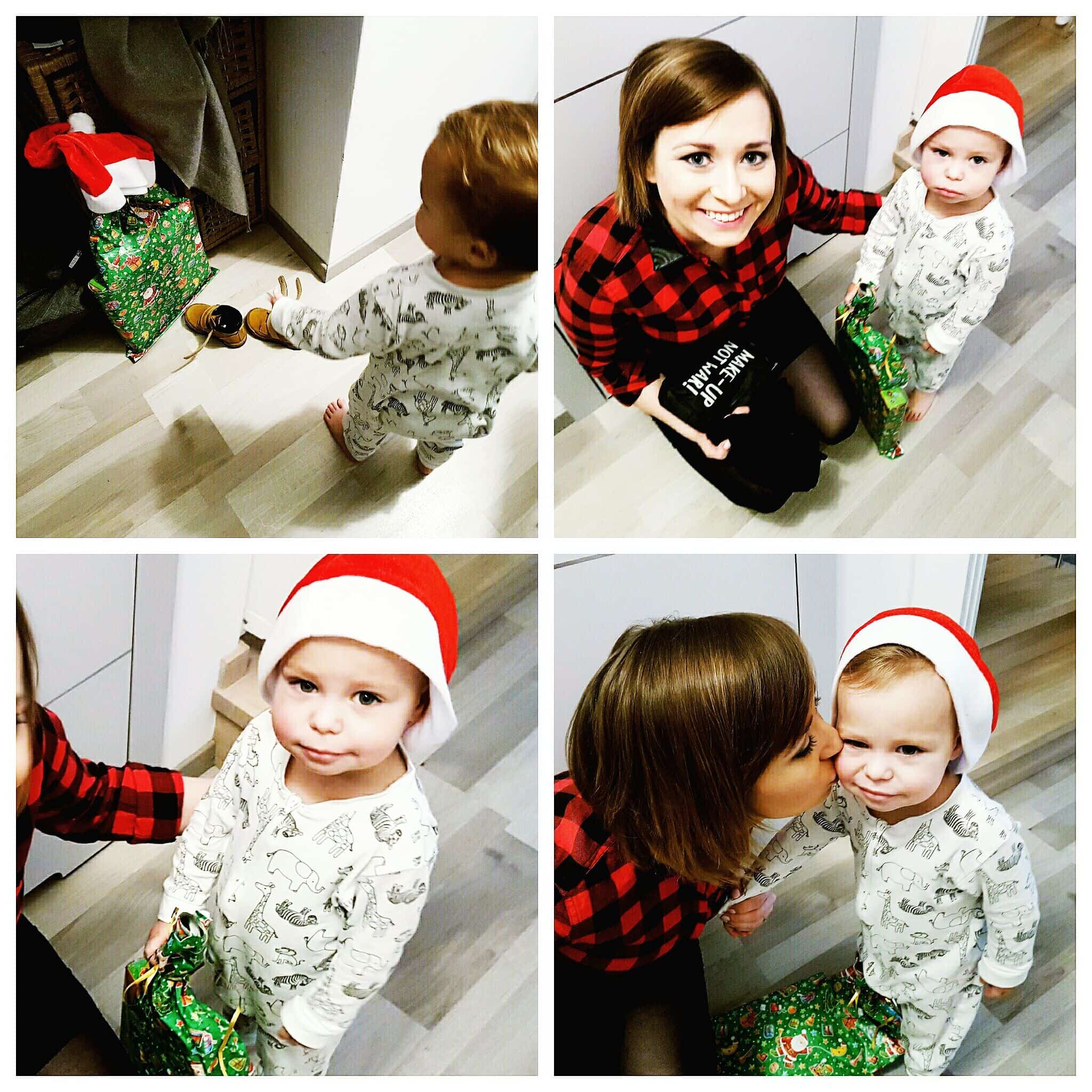 Admit that Mikuś has a face, as if he already felt that he would have to share gifts with someone else soon 😉

During the first two days of the first month, in which I already knew about pregnancy, I did not have any nagging symptoms, although enlarged blood vessels were already noticeable on my neckline.

Due to the fact that there are two miscarriages behind us, our pregnancy has been under the care of medical care and appropriate pharmacological support, selected on the basis of past miscarriage diagnostics and the history of previous pregnancies.

The tests I did in the first month of pregnancy, on the 28 day of the cycle, are:

Record of first month of pregnancy

What I like the first month of pregnancy for

For the great excitement about the New Life, a fulfilled dream, siblings and a friend for Mikuś. For the enormity of wonderful plans for the future, fulfillment in the role of mother. Plus, no pregnancy problems.

For the mystery that only I and my husband know, and the emotions that stir in us. For this feeling of love for each other, although we thought that you can no longer love more.

For what I do not like the first month of pregnancy

For a secret ... on the one hand, a man would like to shout the happy news to the whole world, break into the priority cash register in Ikea and choose to shop for life, but common sense dictates to hold back for a moment.

For uncertainty ... We have Three Children in Heaven. Not a day goes by without us not thinking about the great loss of not having them in our lives. Each pregnancy is a tremendous gift of new life, it is a moment when all the good and love of this world flows over us. A gift so delicate and sensitive that in an instant it can turn into an unimaginable and endless void. After experiencing it, we already know exactly what to fear.

My starting weight at the end of 1 the first month of pregnancy is 62,2 kg with an increase of 162 cm.

No change. Not enough 😉

This is just ahead of me.

Wonderful! Joy fills every piece of my body and every thought.

The time will come for them. If you are already interested in pregnancy fashion, check out my post about it how to build a capsule maternity wardrobe.

There was no madness and shopping. Although I remember that on this day I bought gifts for people from our company and Christmas decorations at the market. I have skipped the children's section, however.

Take it easy, nothing here.

And what is your story?

Flo - you are finishing the week today! 🎂 Throw in