About me Cooperation ContactShop
Breast-feeding, Parenting
by Agnieszka Kudela
29 comments 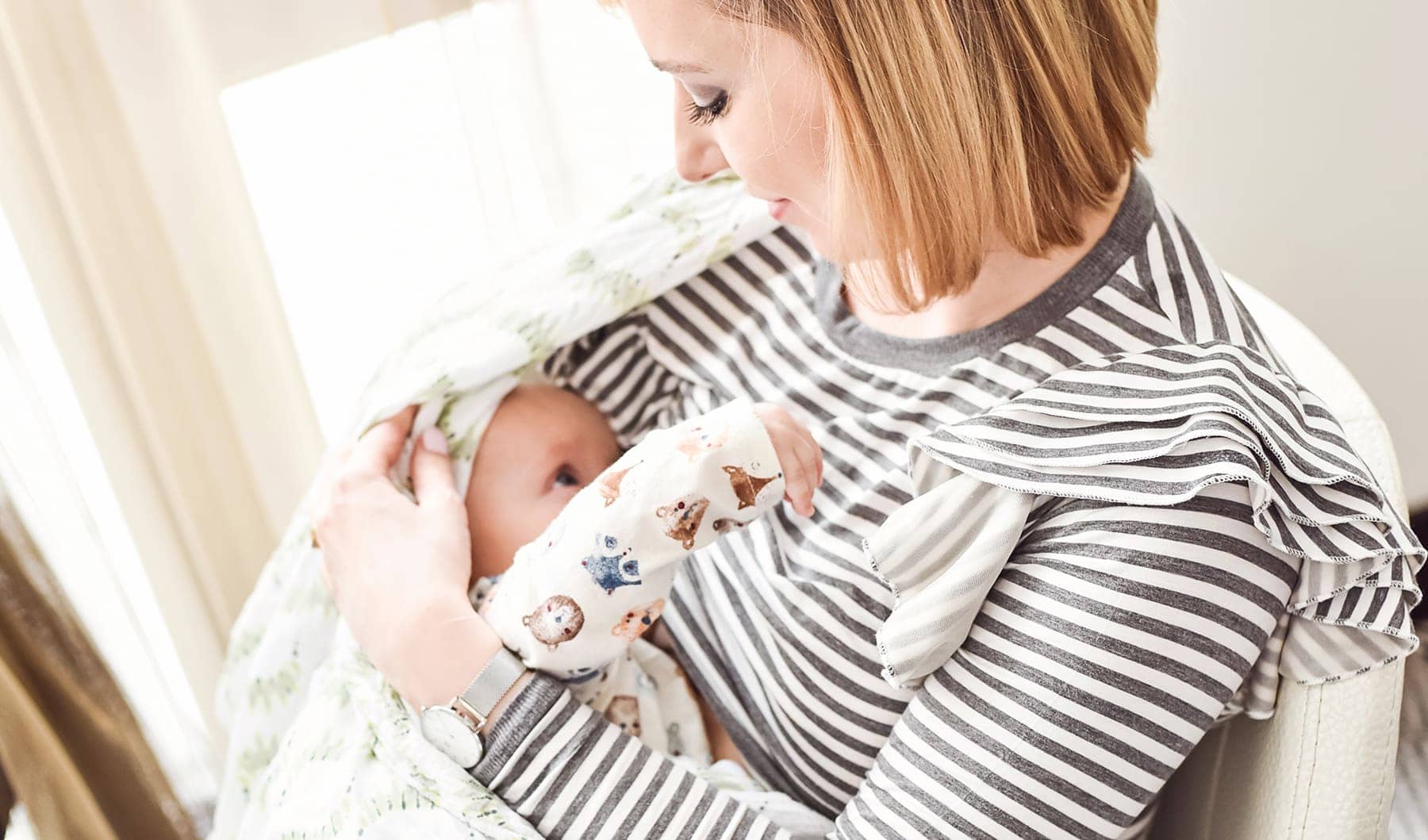 The lactation crisis can affect us at every stage of breastfeeding. Did you know that according to the data of the Central Statistical Office of Poland in 99,4% of women after breastfeeding start breastfeeding, but after 6 weeks only half feeds?

That is why every single day of breastfeeding is our great victory. Most of us finally give up in the fight for feeding, mainly because we do not have access to the right knowledge, support, help or just a warm word, and even have to fight with loved ones who are young, insecure in a new role moms say that she has "weak milk", that "the baby is hungry" and "treats you like a pacifier" (by the way, it is worth answering the question which came first: breast or a pacifier? ?).

I have always heard about the lactation crisis as the beginning of the milky way and was prepared for it. However, the lack of food after a few weeks of feeding completely surprised me.

What is the lactation crisis?

Usually, we talk about a lactation crisis when we, as a mother, feel that we are not able to fully meet the needs of our baby's milk.

We can meet with the lactation crisis both at the very beginning of our milky way (I met it every time after delivery), and later.

The lactation crisis for the first time

In fact, it can be said that our milky way has begun with the crisis. Three and a half years ago, Mikołaj was born by caesarean section, slightly ahead of schedule, and with him only a few drops of food came. I did not have adequate support in the hospital then, also from the staff. Fortunately, I had an experienced sister who convinced me that apparently only 5% of women in the world do not manage to start lactation (if they try very hard) and I certainly do not belong to them, so if I try properly, I will feed .

The aforementioned support from the hospital consisted in ... administering the infant formula. At the same time, however, I fought for every drop of food. I really regretted that I hadn't taken a breast pump or any lactation support drink to the hospital with me. Of course - all these things could be delivered to me later, but I was losing valuable energy and time during which I could already support milk production and not wait idly, which deepened my frustration.

Luckily, I received a breast pump from Wojtek, and a instructions from my sister, i.e. pump at least every 3 hours by the 7-5-3 methodwhich consisted of:

You know what broke me the most? The fact that this pumping did not result in anything but my frustration and exhaustion, because apart from taking care of the newborn, I had the impression that I was only pumping the rest of the time, and worst of all, not a single drop of milk appears in the breast pump. However, it is perfectly fine - here the breast pump stimulates the breasts to produce milk.

It was only on the second day of pumping that the first drops of food began to appear, and it was literally just a few drops that were not even able to be extracted from the bottle to be given to the baby. If it weren't for the support of my closest sister and her faith in me, I don't know if I would have had the strength to fight like that. Unexpectedly, however, on day 3, the desired food finally appeared - I noticed that suddenly the baby started to swallow while attaching it! There was a food that, if I only worked with a breast pump, she might not have noticed, because initially - surprisingly - it was not able to be pumped with the breast pump, but the baby was doing it perfectly.

Lactation crisis after delivery for the second time

When I was going to give birth for the second time, I was much better prepared. For example, I already knew how many milliliters of food the baby needed in the first days after birth, and that feeding with artificial milk in the first day was inadvisable (this was confirmed by the neonatologist on the ward when the midwife insisted on feeding 18 hours after birth). I did not succumb to such persuasions to feed the Child, which allowed me to believe in myself, which - I am sure - grows with each subsequent child. I took the breast pump with me and pumped it whenever I had free to help me produce milk after another caesarean section.

A load of food

When a few days after giving birth, I experienced a large amount of food, each time I felt extremely confident about our milk future. It was a surprise for me that about 3 weeks later the breasts stopped filling with milk and as if "producing it in reserve". My body learned to respond faster to the baby's milk needs and no longer had to store such amounts of milk, being able to produce it almost on the fly. When lactation stabilizes, our breasts may again be soft and even seem empty, and it does not mean that we have too little food, and even more so that our food is disappearing.

The lactation crisis for the second time

The first perinatal lactation crisis after that happened to me, when Maks was less than 3 months old. He spent more and more time only on his breasts, and feeding ended up making him nervous and crying. Intervals between feedings were shortened from 2 hours to sometimes several minutes, and after feeding Maks did not fall asleep calmly. What's more, the feedings increasingly frustrated him.

So it was not difficult for me to notice that I did not have enough milk. What's more, this situation began to repeat itself, especially in stressful situations or after moments of separation from the Child, when, for example, I left them for a few hours with Grandma, and I had to run some errands myself or ... after a whole day I realized that I was absorbed in my duties I ate little, and most of all I drank almost nothing.

My methods for the lactation crisis

1. Time only for a child

When the lactation crisis comes, I try to save 24-48 hours almost only for Maks.

I try to lead a nice home life. I put all my duties aside and try not to let Toddler out of my sight. I answer all his feeding needs instantly. I hug him as much as I can, wear it in a sling, let him sleep on his arms to keep body to body contact as long as possible, or even skin to skin.

Instead of cooking, I can order food, and if it is possible, it replaces me in all my duties Wojtek.

I try to relax as much as possible during the crisis. Don't think about anything, just about children. Play, cuddle and be with you for days.

I have noticed many times that when I am absorbed in some activity, I forget about taking the right amount of fluid, and this is one of the first steps to reduce food supply. For me it goes hand in hand with a very intense and specific headache. That is why I always try to stick to the rules, especially in a crisis, that I must drink at least a glass of water during each feeding.

In times of crisis, I sometimes end up feeding the good old 7-5-3 pumping method, but usually a shortened version of 5-3-2 - the same one I used in the hospital after giving birth. I try not to feed Maks ... as long as we both have enough strength. I admit that in a very crisis situation I happened to feed Maks with my previously expressed milk, as well as with a mixture, but always, always, I combined supplementation with the 7-5-3 method. I try not to allow a situation in which, during a crisis, I artificially increase the supply of milk to the Child, without stimulating the breasts to increase milk production - I am sending a message that: Hello! We don't have enough milk! We increase production! This is especially important during the first 6 months of the child's life, and absolutely important during the first 6 weeks, when all lactation is forming.

In addition to drinking water, I also reach for additional support, often without waiting for a crisis, but when I feel that I have a "weaker" day and Maks eats more often and for less than usual. Then I reach for a glass of warm milk (I personally choose rice or oat milk due to Maks's allergy to cow's milk protein) with a supplement containing barley malt. During the crisis, I drink one portion every morning and another in the evening.

Until recently, I associated products to support lactation only with herbal teas, so I admit that barley malt surprised me a bit. So I found findings:

128 healthy mothers who suffered from a real food shortage were tested.

Each of them, apart from advice, received a recommendation of supplementation with the product of barley malt 2x daily.

After 14 days, 93% of women achieved lactation improvement, which consisted of:

There can be only one conclusion from this study: the supply of barley malt helps fight the problem of insufficient food.

[source: M. Nehring-Gugulska, MD, PhD, Associate Professor M. Kucia, M.D. E. Wietrak, Stimulation of lactation with the use of barley malt and the child's growth parameters in the case of a lactation crisis]

There are several products containing barley malt on the market, but after analyzing their compositions I chose Prolaktan from Prenalen. In addition to the extract of roasted barley and rye (which, according to the results of the study, increase the amount of food), it contains ruthenium (dairy product) and nettle (cleanses, strengthens and provides many vitamins and minerals), but also contains tryptophan in the form of pumpkin seed extract and vitamin D, B1, B6, B12, niacin and biotinthat provide 100% of the daily requirement already in the 1 sachet.

tryptophan is an amino acid necessary for the proper functioning of the body, which, because it cannot be synthesized in the body, should be supplied with food. Why is it so important? Because is a precursor to serotonin (a neurotransmitter regulating, among others, the mood and work of our digestive, cardiovascular and urinary systems), while the derivative of serotonin is melatonin. Melatonin, as we know, increases immunity and affects sleep regulation, which significantly contributes to proper lactation. Improper nutrition and stress can lead to tryptophan deficiencies, which can cause mood disorders and even depression..

Most of this important amino acid is found in pumpkin seeds, sunflower seeds, sesame seeds, linseeds, nuts, oatmeal, cocoa and broccoli. It is easily absorbed from the digestive tract.

Prolactan has a slightly banana flavor, it is mixed with yogurt or milk (also vegetable).

For me it is not only support for lactation, but also valuable support for my diet as a nursing mother.

The main causes of the lactation crisis

In order not to lead to a crisis, it is worth knowing its main causes, and these are:

And what are your experiences with the lactation crisis?

Or maybe you're just looking for support?

🎀 GIVING OUT I gather my strength and I miss you terribly

🎁 [DEALING] Lack of organization and skill

A room that grows with your child? Yes! On

Those three pillows and the fourth with the nutcracker